As the world of NFTs grows in popularity, there are still some who have not bought into the latest craze. Indie game marketplace Itch.io is one of them, and asks you reevaluate your life if you think NFTs are a good thing.

It seems more and more people are buying into the concept of non-fungible tokens (NFTs). But it isn't just individuals who are trying to cash in on the craze. An unreleased game called Legacy from Peter Molyneaux is actually selling virtual real estate in the form of NFTs. Companies such as GameStop are even getting into the latest trend in hopes of making a profit off them as well. However, there are still some who are not sold on the idea of buying virtual property in the form of NFTs. Itch.io posted a tweet a couple of days ago denouncing the technology.

The company states in its tweet that its stance on NFTs are that they are a scam. In fact, it believes that if you are sold on them, you should probably think about it a bit harder. In the post, shown below, the company states, "If you think they are legitimately useful for anything other than the exploitation of creators, financial scams, and the destruction of the planet the we ask that you please reevaluate your life choices." 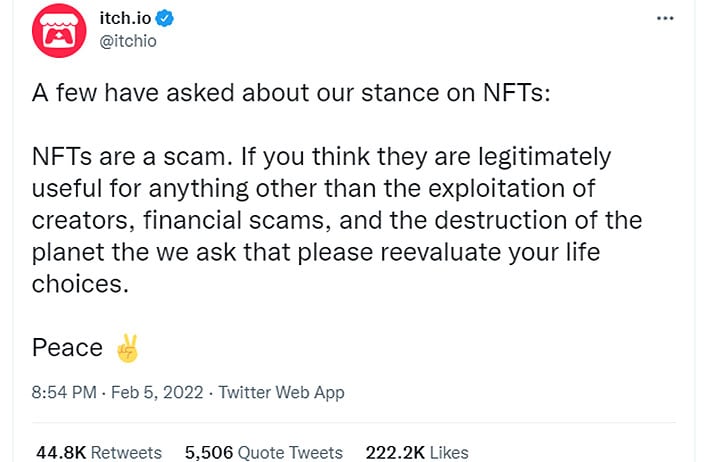 In a reply comment, Itch.io follows up on its original tweet by saying, "Also f--k any company that says they support creators and also endorses NFTs in any way. They only care about their own profit and the opportunity for wealth above anyone else." It continued, "Especially given the now easily available discourse concerning the problems of NFTs." It followed that comment up with, "How can you be so dense?"

NFTs (non-fungible tokens) themselves are a means of owning digital content. The concept has drawn as much criticism as it has appreciation. Companies have received an enormous amount of backlash after announcing they were getting into the NFT game, with some backtracking on the subject afterward. Team 17, creator of Worms, announced it was looking into NFTs and then within 24 hours reversed its decision after fans and partners complained. Electronic Arts (EA) hinted at being eager to pursue NFTs, and then following backlash stated it was "not driving hard" in that direction.

However, other companies are not being swayed by the outcry against the technology. GameStop announced it will pursue the NFT marketplace later this year, and Ubisoft has also moved into the NFT arena despite severe backlash from its fans. An Ubisoft executive commented that "gamers just don't get it". Perhaps Ubisoft and Itch.io can have an open debate on the subject some day on a Hot Hardware stream (one can dream).