When Apple announced the iPhone 12 family earlier this week, the company was quick to tout the new 5nm A14 Bionic SoC that is powering the smartphones. The A14 Bionic is a 6-core chip, with two high-performance cores coupled with four low-power efficiency cores. More importantly, Apple boldly claimed that the A14 Bionic is up to 50 percent faster than SoCs found in competing Android flagships with regards to CPU and graphics performance.

A listing for the 6.1-inch iPhone 12 Pro has been discovered in Geekbench 5, and it does show some strong performance gains compared to the outgoing A13 Bionic. The iPhone 12 Pro was able to pull down a single-core score of 1597, while its multi-core score clocked in at 4152. Not surprisingly, those numbers also closely align with the 4th generation iPad Air, which earlier this month pulled down s score of 1583 and 4198 respectively in Geekbench 5. 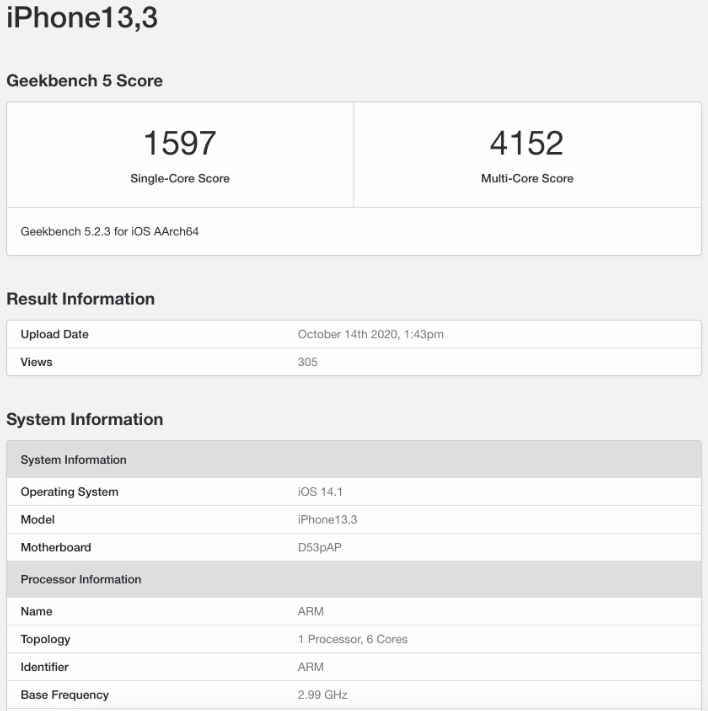 Those scores make the A14 Bionic in the iPhone 12 Pro nearly 20 percent faster than the A13 Bionic in both single- and multi-core scores. The most potent SoC available for Android smartphones at the moment is the Qualcomm Snapdragon 865+, and the A14 Bionic is nearly 20 percent faster than it in the multi-core benchmark. Where things get really interesting, however, is in single-core performance, which has always been a strong point for Apple chips.

In the single-core benchmark, the A14 Bionic extends its advantage over the Snapdragon 865+ (ASUS ROG Phone 3 in X Mode) to over 60 percent. That's well beyond the 50 percent upper limit that Apple quoted during its iPhone 12 keynote. However, the presumed Snapdragon 875, also to be built on the 5nm process node, will be revealed in December, and should bring some strong performance gains of its own. 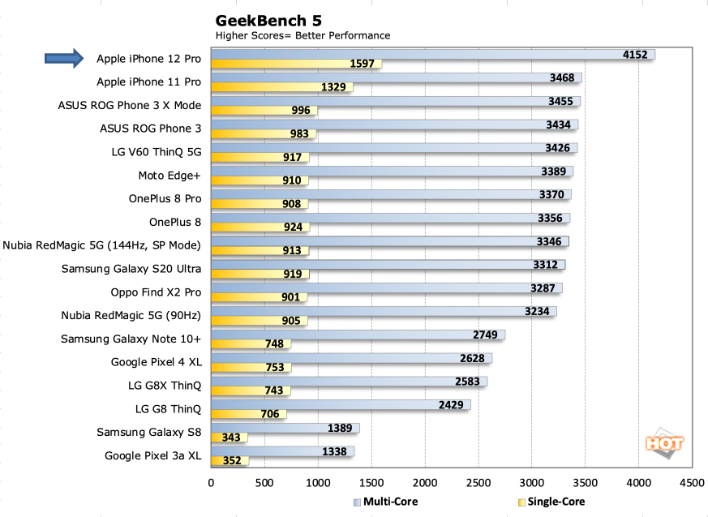 The Geekbench 5 result also confirms the 6-core design with a 3GHz clock and 6GB of RAM, while running iOS 14.1.