A little over three years ago, Intel lured AMD's former Radeon Technologies Group (RTG) boss Raja Koduri to come over and lead its own efforts in graphics, at which time Intel also announced it intended to once again throw its hat into the discrete GPU ring, something it had not attempted since Larrabee. Building discrete GPUs from the ground up takes time, but Intel is progressing at a steady pace. The latest evidence of this is Intel teasing a gaming GPU running a 3DMark test.
This is rather exciting, because up until this point, Intel has mostly shone a light on its Xe-HP and Xe-HPC efforts, and of course Xe-LP, which has already manifested in integrated form with Tiger Lake, and in discrete form with its DG1 Software Development Vehicle cards it put into the hands of its ISV (independent software vendor) partners.

That's all great, but what we are most excited about is Intel's play in the discrete GPU space for gaming. To that end, Koduri tweeted out a screenshot of an unreleased 3DMark test being run by an Xe gaming GPU. Have a look... 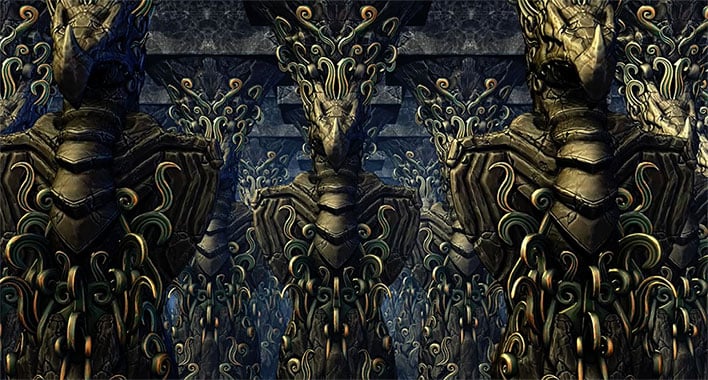 "Xe-HGP mesh shading in action, with the UL 3DMark Mesh Shader Feature test that is coming out soon," Koduri wrote.

That is the extent of the teaser—there's no information about how well the card ran the test or what the hardware specifications look like at this time. However, the bigger takeaway is that this is the first real tangible teaser of Intel's Xe-HPG GPU for gaming, and its capabilities.

You may recall, we spoke with Intel about its efforts in discrete graphics in late 2018. While it was tough to pry much information out of the company, we were told that its focus was "not just about pricing and framerates—it's about things like great technology, driver quality, and features. We want to look at every dimension that is is important a user when it comes to graphics."
It is an interesting comment on hindsight, given that Intel is now showing off a gaming GPU running the 3DMark Mesh Shader test. Mesh Shaders are a big component of the DirectX 12 Ultimate API, and are already supported by AMD (RDNA 2) and NVIDIA (Ampere and Turing). Koduri's tweet serves as confirmation that Intel's Xe-HPG will support Mesh Shaders as well.
What exactly is a Mesh Shader? Here's how Microsoft explains it...

A Mesh Shader begins its work by dispatching a set of threadgroups, each of which processes a subset of the larger mesh. Each threadgroup has access to groupshared memory like compute shaders, but outputs vertices and primitives that do not have to correlate with a specific thread in the group. As long as the threadgroup processes all vertices associated with the primitives in the threadgroup, resources can be allocated in whatever way is most efficient. Additionally, the Mesh Shader outputs both per-vertex and per-primitive attributes, which allows the user to be more precise and space efficient.

This sort of suggests Intel is shooting high, by implementing the latest technologies into its upcoming gaming GPUs. Not that this is surprising—Intel has confirmed it intends to offer mid-range and high-end graphics card solutions based on Xe-HPG, with hardware-level support for real-time ray tracing.
Intel is also embracing technologies like variable rate shading (VRS) and game sharpening, both of which are coming along for the ride in its gaming GPUs. As to when exactly Intel will make its highly anticipated debut into mid-range and high-end discrete GPU gaming markets, well, that's a good question.