It's no secret that Intel's true desktop performance graphics card is on its way, affectionately referred to as DG2. Thanks to a leak earlier in the month, we know that Xe HPG (Xe High Performance Gaming) will apparently come in five distinct flavors, with anywhere from 128 to 512 execution units. We've also gotten a look at the rumored PCB layout for at least one DG2 SKU. Now, however, it looks like we're getting a first look at actual PCBs based on Intel's big GPU.

Thanks to YouTuber Moore's Law is Dead, we get a (heavily watermarked) photo of the PCB along with some apparent specifications changes. Let's get to those first. Apparently now, the 512 EU version of DG2 will boost up over 2.2 GHz, which is more than 20% faster than previously reported. The power target for desktop versions is supposed to be less than 235 Watts, which is comparable to NVIDIA's GeForce RTX 3070. That seems to line up with the rumored performance, which has been somewhere between the 3070 and larger GeForce RTX 3080.

When overlaid with the diagram previously posted by Igor's Lab, the ball grid array (BGA) of the photographed graphics card seems to line up pretty well with the supposed high-end 512 EU version. However, the way that the cooler appears to be mounted in the photo conflicts with where the GDDR6 VRAM would be, so perhaps we should take this with a grain of salt. Intel's Pete Brubaker says the final version of the card is "right around the corner" so we'll see how it turns out. 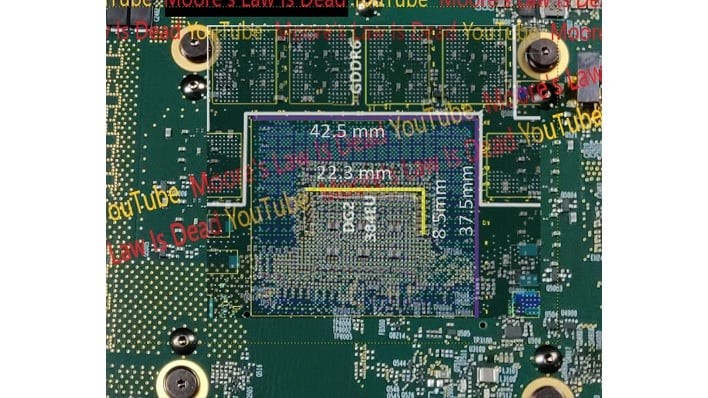 Beyond just pure graphics grunt, Intel is apparently confident in the other features of its DG2. The YouTuber quotes his leaker source as saying that Intel is "confident they will crush" competing video encoders on other discrete graphics cards. Intel's QuickSync was one of the first technologies to offload video encoding from the CPU and onto dedicated hardware, and every consumer graphics card in recent years has the same ability. Ray tracing support is on the table, of course, and Intel apparently believes that it has a competitive solution, but expects NVIDIA's second-gen RTX hardware to maintain an advantage. Apparently Team Blue also has a DLSS alternative technology in the works, a necessity when it comes to limiting the performance impact ray-traced graphics rendering. AMD's DLSS competitor is still in development, and Big Navi GPUs could really benefit from it as well.

Hopes are pretty high around the PC enthusiast community, considering all the shortages of both NVIDIA and AMD graphics cards. NVIDIA has tried to combat its supply issues with new Low Hash Rate (LHR) models, but it remains to be see if that will give a boost to available cards and bring them closer to retail pricing. If Intel's new GPU can also hit the rumored performance levels of somewhere approaching a GeForce RTX 3080, that would likely further increase the supply of discrete graphics on the market and bring relief to gamers everywhere.