We know from a recent Twitter post by Intel's Pete Brubaker that it won't be too terribly long before Intel's Xe-HPG DG2 gaming GPU is released—to use his words, it's "right around the corner." Following up on that, an interesting leak emerged today, highlighting a mix of DG2 GPUs for both mobile and desktop, with up to 512 execution units (EUs).
That is a figure we have seen multiple times before, in relation to DG2. That is believed to the top-end configuration, and it is rumored the full version of DG2 will offer performance somewhere in between a GeForce RTX 3070 and GeForce RTX 3080, and perhaps on par with the not-yet-released GeForce RTX 3070 Ti. That would be an encouraging start to Intel's ascension into discrete graphics, if the performance rumors end up being accurate.
As for this new batch of leaked specifications, Igor Wallossek from Igor's Lab posted some juicy details, including an older slide indicating Intel at one point hoped to link DG2 with its upcoming Tiger Lake-H processors. Have a look...

Intel is getting ready to launch its Tiger Lake-H processors in up to 8-core/16-thread configurations for high-end laptops, but they will not carry DG2 graphics. Instead, DG2 will make its debut on mobile with Intel's future Alder Lake-P processors, due out later this year.
In any event, we can see in the diagram above that DG2 will connect to the CPU by way of a PCI Express 4.0 x12 link. DG2 will have its own allotment of GDDR6 memory, so it will not need to tap into a laptop's main system memory. We can also see support for HDMI 2.0 and DisplayPort 2.0. The latter would be a welcome inclusion, but what about HDMI 2.1? Either Intel is skipping it out of the gate for some reason (which would be disappointing), or it's not listed here because this is an older diagram. We'll have to wait and see.

As for the specifications, Wallossek outlined five different SKUs for both desktop and laptop solutions. Three of them feature a BGA2660 package (SKU 1, SKU 2, and SKU 3), while the package type for SKU 4 and SKU 5 are not yet known. Here's the breakdown...
There are some missing specifications, especially for SKUs 4 and 5. And across the board, it's not clear what the TDP rating will be for the desktop variants. 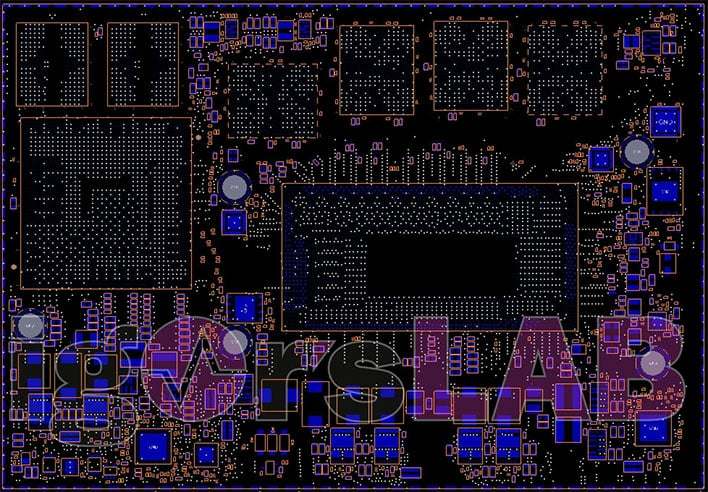 Wallossek also shared a board layout diagram for a DG2-128 GPU (above). This is the laptop version, paired with a BGA-CPU. There is not a whole lot to be gleaned for the diagram, but it is interesting to look at all the same.
The GPUs will also feature up to 16MB of smart cache. According to the leak, the breakdown is 16MB of smart cache for SKU 1 and SKU 2, and 8MB of smart cache for SKU 3. It's not yet clear how much smart cache SKUs 4 and 5 will have.
We expect to see a lot more DG2 leaks and rumors in the coming weeks and months, as we get closer to formal launch later this year.