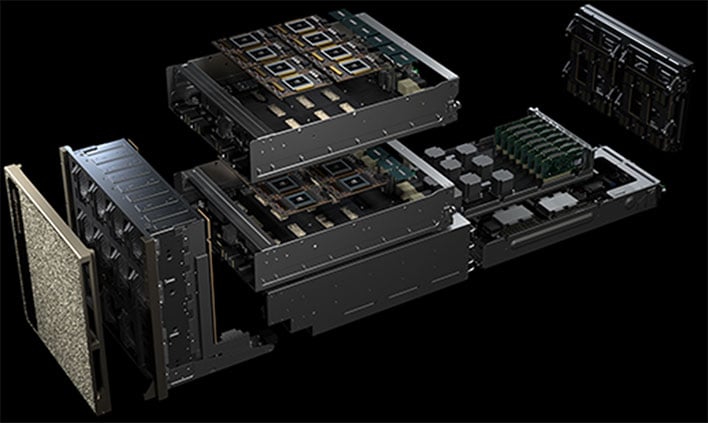 Unless all of the leaks and rumors have it wrong, NVIDIA will eventually roll out Ampere, it's next-generation GPU architecture for high-performance computing (HPC) workloads and presumably consumer applications as well (GeForce RTX 3080 Ti, anyone?). As it pertains to the former, an interesting trademark application for a "DGX A100" product has been spotted.
NVIDIA's DGX products are high powered workstations built around cutting edge GPU hardware. The DGX-2, for example, features up to 16 interconnected Tesla V100 GPUs based on the company's Volta architecture. NVIDIA bills it as "the world's most powerful AI system for the most complex AI challenges," with up to 2 petaFLOPS of performance on tap.
What about the DGX A100? Twitter user Komachi discovered the entry lingering in the Justia trademark database. NVIDIA filed for the trademark in late March in the European Union. There is not a lot to be gleaned from the trademark application itself, other than a lot of references to artificial intelligence and scientific workloads.
The general assumption is that DGX A100 is the next evolution of NVIDIA's DGX systems. Previous systems included the DGX-2 (Volta), DGX Station (Volta), and DGX-1 (Volta and Pascal). The trademark application suggests NVIDIA will not be calling the next-gen version DGX-3, though that remains to be seen.
Changing names makes a bit of sense if the DGX A100 does indeed adopt NVIDIA's Ampere GPU architecture. Ampere is rumored to be a major upgrade.
As for when more details will come to light, the Coronavirus pandemic has pushed things back a bit. NVIDIA ending up cancelling its in-person GPU Technology Conference, and is now planning an official GTC 2020 keynote for May 14, which will be streamed live on YouTube beginning at 9:00 am EST.