If you thought Alder Lake-S would be Intel's next desktop processor launch, think again. There's a new CPU line that was launched without any boisterous announcement or fanfare, that being Tiger Lake. Yes, Tiger Lake already exists, but not just in mobile form anymore—Intel ported its Tiger Lake architecture over to the desktop.
There are four new SKUs, each with a new "B" suffix. Well, the top model carries the "KB" suffix, because it is also an unlocked processor. So what does the B designation mean? In a statement, Intel essentially confirmed speculation that the B means BGA, as these new chips are ball grid array parts that are soldered directly to the motherboard, rather than LGA (land grid array) like most of its modern desktop processors.
These are the SKUs...
For the casual consumer, wading through Intel's model names, architecture codenames, and generational labeling can be confusing. In this instance, Intel is essentially reusing its 12th Gen Core "Rocket Lake" model numbers, at least for the Core i5 SKUs and up. However, chips like the 11th Gen Core i9-11900KB should not be confused with the 12th Gen Core i9-11900K, because they are two entirely separate architectures. 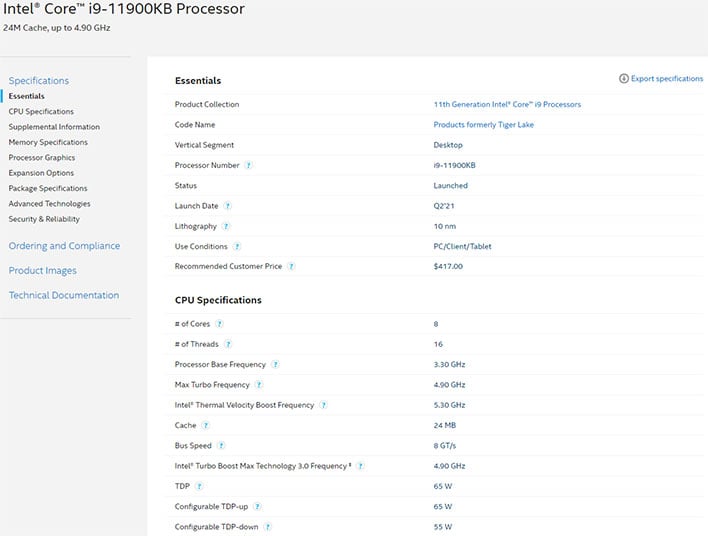 Where will these show up?
"Intel has partnered with customers interested in expanding their product portfolio with enthusiast, small form-factor desktop designs. The Intel Core i9-11900KB processor is a BGA solution built with unique specifications and performance specifically for these designs," Intel said in a statement.
We can safely assume the same explanation applies to the other three Tiger Lake-B SKUs, and not just the Core i9-11900KB. It will be interesting to see what kinds of designs Intel's hardware partners concoct, with access to these new desktop parts. These could power some relatively stout mini PCs and compact SFF systems that could prove intriguing, if priced right.