It would not be a Thursday without another Tiger Lake benchmark leak (or a Wednesday or a Tuesday, or any day that ends in "Y"). We have seen a lot of leaked Tiger Lake data over the past several weeks, and this latest one pits an upcoming Core i7-1165G7 processor with Gen12 graphics against AMD's already-launched Ryzen 7 4800U with Vega graphics.
Tiger Lake has yet to materialize in finalized form, though Intel must be close to doing so. It sure seems that test systems are already in the hands of OEMs, developers, and possibly reviewers (for the record, we don't have any Tiger Lake rigs on hand). Hence why these kinds of leaks keep appearing, particularly over at 3DMark's database.
Part of the intrigue surrounding Tiger Lake is that it will bring with it Intel's Gen12 "Xe" graphics, which is based on the same underlying architecture that will power the company's discrete GPUs later this year (and beyond). That's also what makes these glimpses on 3DMark a little more interesting than a typical leak.
So, what do we have here? As spotted by APISAK, it's an 11th generation Core i7-1165G7 performing a benchmark run in 3DMark 11. It's a low-power chip that is part of Intel's Tiger Lake-U stack. It's not clear if 3DMark is correctly the CPU or not, but according to the database entry, it is a 4-core/8-thread processor with a 2.8GHz base clock and 4.7GHz boost clock.
Here's how it fared... 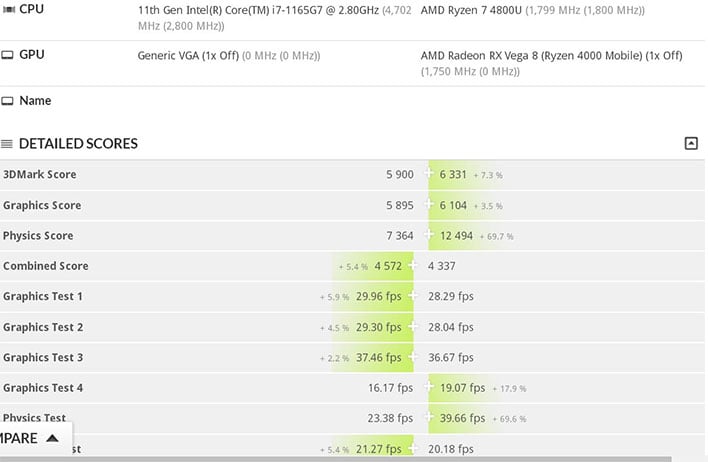 The Ryzen 7 4800U is a higher-end part (compared to the Core i7-1165G7) with 8 cores and 16 threads clocked at 1.8GHZ to 4.2GHz, with 8MB of L3 cache and 4MB of L2 cache. Like the Intel part, it is a low power chip destined for thin and light laptops.
On the graphics side, it wields 8 Vega cores clocked at 1,750MHz. This is the more interesting comparison. Predictable, the core and thread advantages of the Ryzen 7 4800U played out in 3DMark's overall and Physics scores.
Looking at the graphics benchmarks, however, Intel's Core i7-1165G7 claimed victories in three of the four Graphics Tests, albeit by a hair (around 1 fps better). Interesting, it lost the fourth Graphics Test by a wider margin (around 3 fps).
The few comments on Twitter to APISAK's post are unimpressed, though keep in mind that the Core i7-1165G7 sits lower on the totem pole than the Ryzen 7 4800U. It has fewer CPU cores and threads, and that probably means the GPU portion is downgraded as well, compared to what will be available on higher end options.
But hey, it will all come down to actual performance (we're cautious not to read too much into leaks) and pricing. And for those things, we still have some waiting to do.