3DMark's database is the place to be if you are in search of 'leaked' benchmarks for unreleased parts, as preliminary testing on future products often leads to scores being uploaded to the site. That is seemingly the case again with a familiar face—Intel's upcoming DG1 discrete graphics card based on its Xe graphics architecture.
One thing to keep in mind, however, is that early samples of DG1 are almost definitely the pre-release cards Intel provided to developers earlier this year. These are Software Development Vehicle (SDV) cards for testing and getting acquainted with the Xe architecture. Intel has said all along that the hardware and performance of these parts are not indicative of the graphics cards that will end up in the hands of consumers later this year (and beyond).
The underlying Xe architecture in DG1 is what is being infused into Intel's mobile Tiger Lake processors, otherwise known as Gen12 on the graphics side. These will succeed Ice Lake with its Gen11 graphics, and from previous leaks, there looks to be a decent performance uplift with Tiger Lake.
As for this newest leak, Twitter user APISAK was initially coy, posting just a number on the social media site—5,960. When pressed by Videocardz on what he was referring to, he responded "nothing important," then proceeded to uploaded a 3DMark screenshot, and said it is reference to DG1. Have a look... 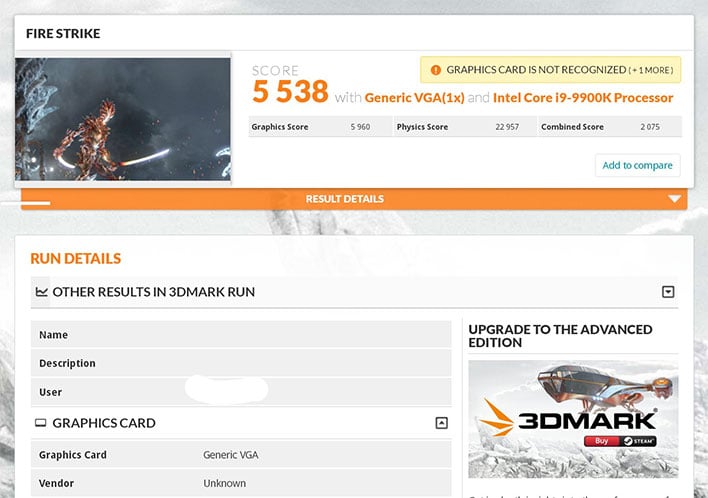 You can click to enlarge the screenshot, though the only other revealing information is the driver version (28.20.16.9999). 3DMark was not able to extract much else from the supposed DG1 part, as it lists the card as having 0MB of memory, a 0MHz core clock, and a 0MHz memory clock. Those are obviously all incorrect, unless Intel figured out a way to whip up graphics performance from thin air.
In any event, the part posted a 5,960 Graphics score in this Fire Strike benchmark run. To put that into perspective, the average Graphics score for a GeForce GTX 1050 (Pascal) desktop graphics card in Fire Strike is 5,695, according to 3DMark's database tool, so the DG1 part came out a little bit ahead. The average score for a GeForce GTX 1650 (Turing), however, is 9,132.

If looking at notebook GPUs, the average scores for a GeForce GTX 1050 Ti (Pascal) and Radeon RX 560X (Polaris) are 7,722 and 6,442, respectively. A Radeon RX 5500M averages 12,358.
So there is your range of performance comparisons. We'd caution against drawing any sort of concrete conclusion from all this, considering the part at the center of this leak is basically a testing board. Still, it's interesting to see in the absence of shipping Xe graphics parts.