April showers might bring May flowers, but what do April lakes bring? Lots of early looks at upcoming processors, that's what. There have been plenty of leaks this month already, and adding to the growing pool is a 3DMark database entry pointing to an Intel Core i7-1165G7 mobile processor based on the chip maker's Tiger Lake-U series.
Tiger Lake-U has not been released just yet, though Intel did sort of introduce the upcoming series at the Consumer Electronics Show (CES) in January. 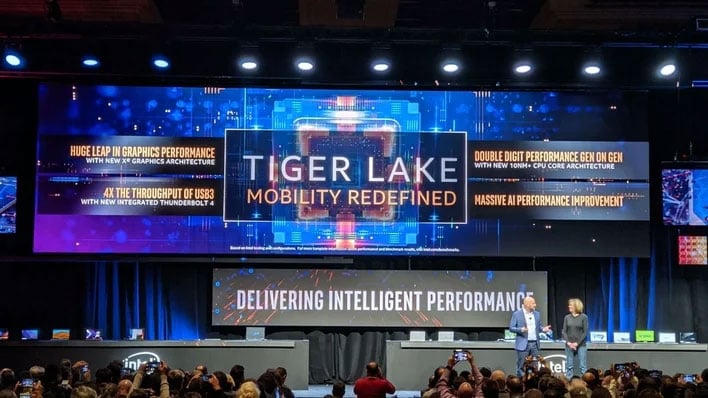 "Tiger Lake is designed to bring Intel’s bold, people-led vision for mobile computing to life, with groundbreaking advances in every vector and experience that matters. With optimizations spanning the CPU, AI accelerators and discrete-level integrated graphics based on the new Intel Xe graphics architecture, Tiger Lake will deliver double-digit performance gains, massive AI performance improvements, a huge leap in graphics performance, and 4x the throughput of USB 3 with the new integrated Thunderbolt 4," Intel stated at the time.
Intel also revealed that its Tiger Lake parts are being built on an enhanced 10-nanometer manufacturing node, and will ship in systems sometime this year. While we wait, here's a look at the aforementioned benchmark appearance... 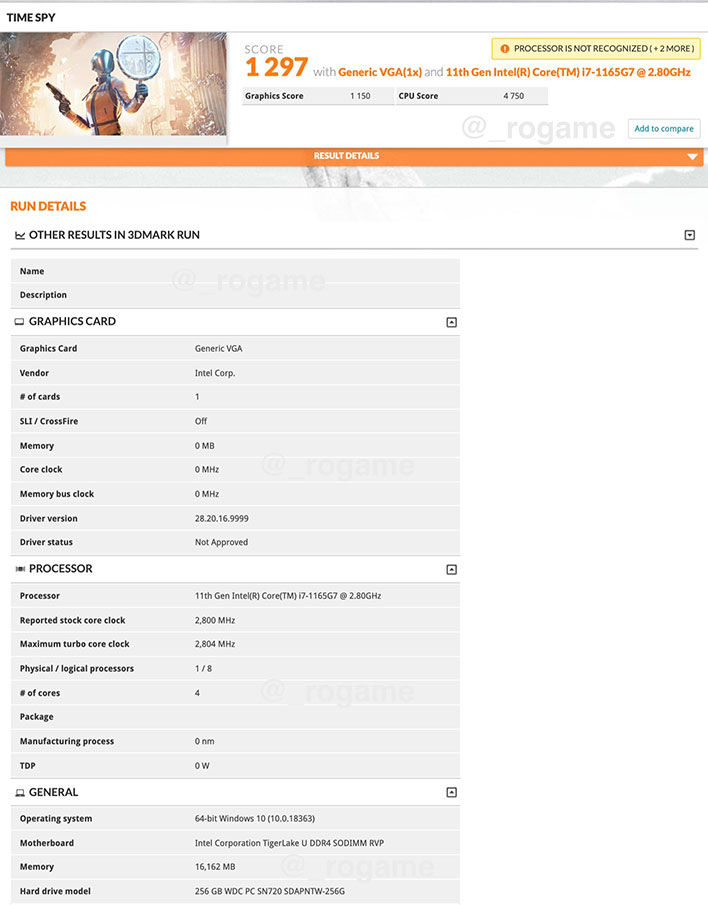 Once again, credit goes to Twitter user @_rogame, the benchmark database sleuth who dug up the entry. As identified by 3DMark, the 11th generation Core i7-1165G7 sports 4 cores and 8 threads with a 2.8GHz base clock, along with a very impressive 0W TDP! Just kidding—3DMark is obviously unable to identify the correct TDP, unless Intel discovered some new material with magical properties to replace silicon.
The Tiger Lake-U part posted an Overall score of 1,297, a Graphics score of 1,150, and a CPU score of 4,750. How do those scores compare with Intel's 10th generation Ice Lake parts, and AMD's Zen 2 mobile CPUs?
"Core to Core Tiger Lake is better. But if you see the whole package, 4800U (8C/16T) at 15W gets same iGPU score and 35 percent more CPU score," @_rogame says, adding that "Ice Lake is trash."
We don't agree with their Ice lake assessment, but hey, to each their own. Comparisons are tricky as well, because unless we perform the testing ourselves, we can't account for different variables that could push a platform in one direction or the other. That said, here's a Time Spy entry for the Core i7-1065G7, which in this particular benchmark run posted an Overall score of 919, a Graphics score of 806, and a CPU score of 4,529.
Based on previous leaks, Tiger Lake-U is poised to deliver strong single-threaded and multi-threaded performance. It will also feature Intel's Gen12 Xe graphics engine, so it will be interesting to see how these low power parts fare once they actually arrive.