It's always fun to cheer for your team, isn't it? Sometimes it seems like folks love nothing more than to divide into opposing groups over the most arbitrary of boundaries and then battle to the figurative (or literal!) death over the difference. The Tech world is full of such holy wars, but few are as intense or as long-lived as "Apple fans vs. everyone else."

That battle was once "PC vs. Mac", and before that, "Intel vs. Motorola." It died out somewhat while Apple was using Intel's processors in its own machines, but now that the fruity company has moved on to engineering its own processors, the holy war is on once again. This time, Apple is challenging Intel (and its eternal rival, AMD) head to head in the arena of single-threaded CPU performance—an area where the x86-64 ISA has rarely been challenged in recent years. Yesterday, it seemed Apple had snatched victory, but today that story turns around.


Indeed, just one day after we pointed out that the new Apple M1 Pro and M1 Max CPUs had bubbled to the top of the Passmark single-threaded CPU benchmark listings, we have new data from the fresh-out-the-oven 12th-generation Core family that has Intel stepping over Apple to once again claim the #1 spot in both Passmark and Geekbench's single-threaded benchmarks. 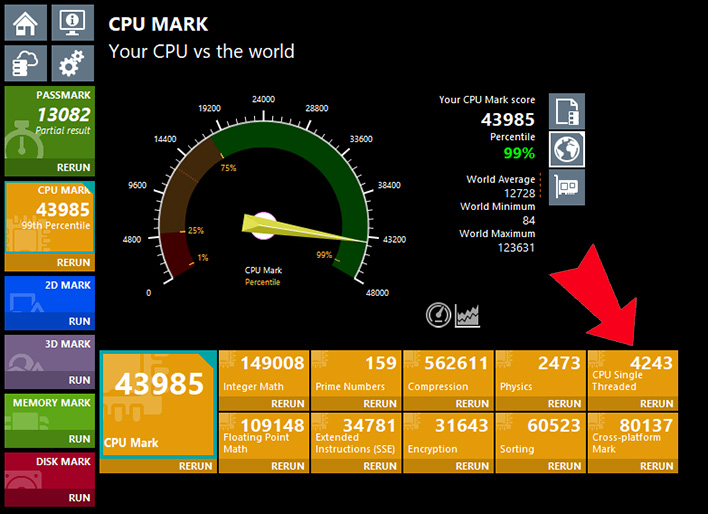 First up, a screenshot of Passmark's Performance Test showing the CPU tests. These were run on the Core i9-12900K, and there's a number of tests on display here, but the number we're concerned with is the single-threaded test indicated with the big red arrow. A score of 4243 puts the 12900K squarely at the top of the list, ahead of both the M1 Pro and M1 Max at 3880 and 3858 respectively. It also puts Intel's finest well ahead of AMD's Ryzen 9 5950X at 3497. 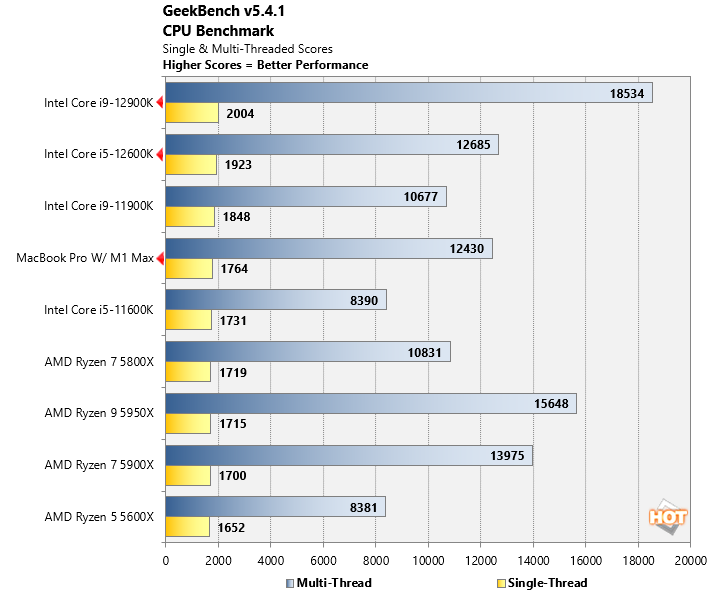 Next up, we have GeekBench results for a variety of recent processors, sorted by single-threaded performance. Geekbench clearly favors the Apple chips less than Passmark does, but the M1 Max still puts in an exceptional performance at 1764 on a single thread. Meanwhile, Intel's Core i5-12600K pulls out a 1923, and the top-end Core i9-12900K smashes past the 2000-point mark. Interestingly, both Alder Lake chips beat the M1 Max in multi-threaded performance, as well—not surprising in the case of the 16-core Core i9, but a little more impressive in the case of the Core i5, which matches the M1 Max's core count.

Naturally, there are a laundry list of caveats to these benchmarks that must be mentioned. For starters, both of these tests are purely synthetic benchmarks that don't necessarily reflect real-world performance in any particular workload. Moreover, in the case of the Apple results, the tests are not our own data, so we can't guarantee their veracity. Geekbench data for the M1 Max sourced from the Geekbench results browser, while Passmark publishes its own list of user-sourced results here.

Furthermore, we have to clarify that we're well aware of the differences in these platforms. The M1 Max is a mid-power laptop SoC with a hard-wired mega-wide memory bus and an entirely different OS platform versus Alder Lake desktop chips. It bears mentioning that, at least in these tests, our test rig sporting a Core i9-12900K draws an average of about 85 W from the wall, with rare peaks up to 99 Watts (total system power, which is key). That same system draws about 60 Watts from the wall when idle. That's surely more power than an M1 Max-powered MacBook Pro will draw under the same test, but also not an outrageous figure in its own right.

Even with all of those disclaimers and admissions, it's still a fun comparison. Competition in the computing world is heating up in a way that it hasn't in decades. Along the way we have refreshed AMD CPUs with big caches, Intel's first discrete GPUs in 20 years, and ever-faster CPUs from Qualcomm and others as well. Here's to looking forward with bright eyes toward 2022.