Little by little, Intel keeps revealing more bits and pieces about Arc Alchemist, its first discrete graphics cards built specifically for gamers. Even so, there are plenty of questions that remain. One of those questions is what will the graphics cards actually look, and a new purported photo of Alchemist from a supposed inside sources may reveal the answer.
One thing to keep in mind is that Alchemist is still several months from launching. Intel said it will debut in the first quarter of 2021. So conceivably, a launch could still be six months in the distance. It could potentially be even longer for the desktop part—according to the latest rumor, Alchemist will show up in laptop form first, before manifesting in a desktop graphics card.
Anyway, what you see up top is a previous render from YouTube and leaker Moore's Law Is Dead. He had posted a handful of renders based on an early engineering sample and what he was able to put together with "numerous sources who have 100 percent track records." Following up on that, however, one of those sources sent him an actual photo (read: not render) of an Arc Alchemist card in the flesh. Here it is...

This is purportedly the flagship variant, a DG2 card with 512 execution units, provided by one of his longtime, reliable, and "best sources."

Designs can and often do change over time, so even if this how Alchemist looks right now within Intel's labs, the final design could be different. As it stands, however, Intel isn't doing anything too crazy here, with regards to function—as shown, Alchemist sports a molded shroud with a pair of cooling fans, each with nine blades. There's also presumably a finned aluminum heatsink underneath, as was more visible in past renders that look virtually identical to the actual photo above.

Speaking of past renders, the one up top shows some ventilation slits, and the PCI Express power inputs. Assuming this holds up to the final design, Intel's flagship Alchemist card will require 8-pin and 6-pin power connectors (one each). And yet another angle shown in the video reveals a trio of DisplayPort connectors and a single HDMI connector (presumably HDMI 2.1).
Image aside, there's some other interesting tidbits contained in the latest video. Some of it is an extension of past information. For example, it's been previously said that Alchemist in top form would perform between an NVIDIA GeForce RTX 3070 and GeForce RTX 3070 Ti. Following up on that, an OEM purportedly revealed that in mobile form, Intel Arc graphics in laptops will fall just short of NVIDIA's top mobile Ampere chip at the highest TDP levels (meaning the top mobile GeForce RTX 3080)

One part we found especially interesting is a supposed quote from a major OEM on lower end SKUs. 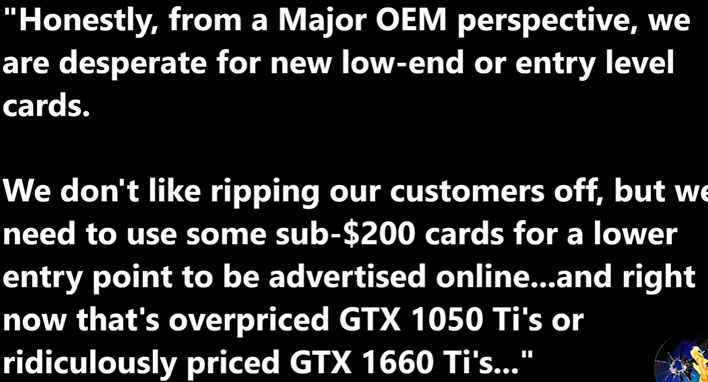 "Honestly, from a major OEM perspective, we are desperate for new low-end or entry-level cards. We don't like ripping our customers off, but we need to sue some sub-$200 cards for a lower entry point to be advertised online," an unspecified OEM is quoted as saying. "Right now that's overpriced GTX 1050 Tis or ridiculously priced GTX 1660 Tis."
The OEM is further quoted as saying that a lower end card like a 128EU Alchemist part is "long overdue and will be much appreciated by us...especially if we get a discount bundling them with Alder Lake...and we will!"
Hopefully Intel can make a splash, both in terms of price and performance, but also actual availability. We'll see. In the meantime, check out Moore's Law Is Dead's latest video for a few more looks at the design, and other info.