Earlier this week, Intel formally introduced the world to its 3rd Gen Xeon Scalable processors, its first server chips built on a 10-nanometer manufacturing process. Otherwise known as Ice Lake-SP, these are being offered in up to 40-core/80-thread configurations, up from 28-core/56-thread configs with its 2nd gen products. Looking ahead, however, rumor has it Intel's 4th Gen Xeon Scalable processors codenamed Sapphire Rapids will feature up to 56 cores and 112 threads, along with some additional goodies.

Sapphire Rapids is not a complete secret. In fact, Intel talked a little bit about Sapphire Rapids during its Architecture Day 2020 event, noting that its upcoming Xeon processors are based on its enhanced SuperFin technology. While light on details, Intel confirmed that Sapphire Rapids will feature support for DDR5 memory and PCI Express 5.0.
One of the persisting rumors, however, is that Sapphire Rapids will also wield on-chip HBM2 memory. This is reinforced by a supposedly leaked slide outlining some of the specifications. Have a look... 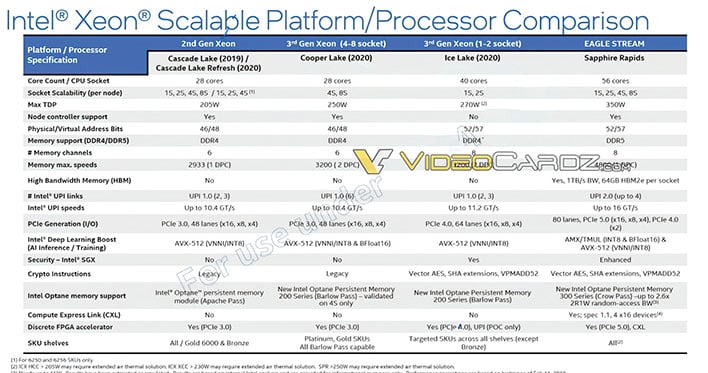 If this is real, it is an older slide, as it shows Intel's recently announced Ice Lake Xeon processors releasing in 2020 instead of 2021. Further assuming that nothing has changed since this slide was made, Sapphire Rapids will scale to 56 cores with a max 350W TDP rating.
It is also shown as supporting eight-channel DDR5 memory at up to 4,800MHz, 80 lanes of PCI Express 5.0 traffic, and 64GB of on-package HBM2e memory per socket (by way of fours 16GB HBM2e stacks), with up to 1TB/s of memory bandwidth per socket. With Sapphire Rapids destined for 1S, 2S, 4S, and 8S configurations, we could be looking at up to 512GB of HBM2e memory in a decked out rack.

All of these new and upgraded features will being about a new Xeon pin layout. Specifically, a new LGA4677-X socket will take the place of LGA4189 for the latest Xeon processors, when they arrive. The additional pins will enable some of the new capabilities discussed above.
Between the pending launch of Sapphire Rapids and AMD's eventual EPYC "Genoa" CPUs based on Zen 4, things are going to get interesting in a hurry in the server space.