Back during CES 2021, Intel revealed some concrete details on its upcoming 11th generation Rocket Lake-S desktop family. Rocket Lake-S is the successor to Comet Lake-S, and will be the last 14nm product family from Intel built on the 14nm process node (which has long overstayed its welcome).

We already knew that the Core i9-11900K features a base clock of 3.5GHz, but this new leak confirms that the Turbo frequency is 5.1GHz, while the Turbo Boost Max 3.0 frequency is 5.2GHz. Thermal Velocity Boost checks in a 4.8GHz all-core or 5.3GHz max single core. 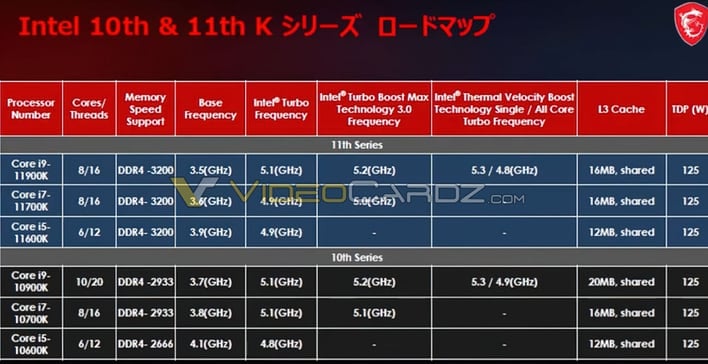 Both the Core i9 and Core i7 models come in 8-core/16-thread configurations and include 16MB of shared L3 cache. The primary difference between the two chips appears to be with respect to base/turbo clock speeds/ The Core i5-11600K, on the other hand, is a 6-core/12-thread processor with 12MB of shared L3 cache. All three processors support DDR4-3200 memory, and have a stated Thermal Design Power (TDP) of 125 watts. 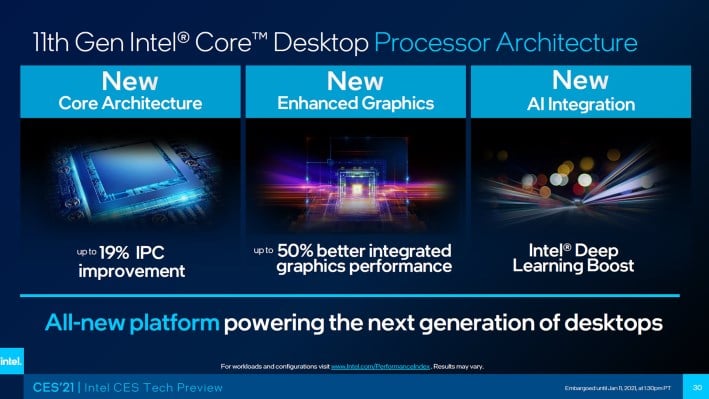 Rocket Lake-S processors are compatible with existing Z490 motherboards (and even enable PCIe 4.0 support), and Z590 motherboards are also on deck for those that simply want the best of the best. The Z590 will be the end of the line for Intel's short-lived LGA-1200 socket, and it will be replaced by the rumored Z690 chipset when Alder Lake-S lands during the second half of 2021.

Alder Lake-S processor will be built on Intel's 10nm SuperFin process tech, and will feature a new LGA-1700 socket. It will be a hybrid CPU design with little/big cores, and it will be the first processor family from Intel to support new DDR5 memory technology.