Intel is planning to bring a hybrid CPU architecture to desktops with Alder Lake-S at some point in the relatively near future, which has drawn rough comparisons to ARM's big.LITTLE approach that has worked so well in mobile designs. They are not actually the same thing, but that is a discussion for another time. As it applies to Alder Lake-S, a fresh leak has provided some interesting hardware details.
What we know for sure about Alder Lake is that it will arrive in 2021, according to Intel's latest official roadmap. Intel has also revealed that Alder Lake will combine Golden Cove cores for heavy lifting with Gracemont cores for lighter duty workloads, packaged together in "one highly efficient product" sometime next year.
Intel has been rather coy about some of the finer grain details, and certainly has not announced any specific Alder Lake SKUs at this stage. Be that as it may, a benchmark entry in SiSoftware's SANDRA database highlights an Alder Lake-S desktop processor with 16 cores and 32 threads. Here is a look at the entry... 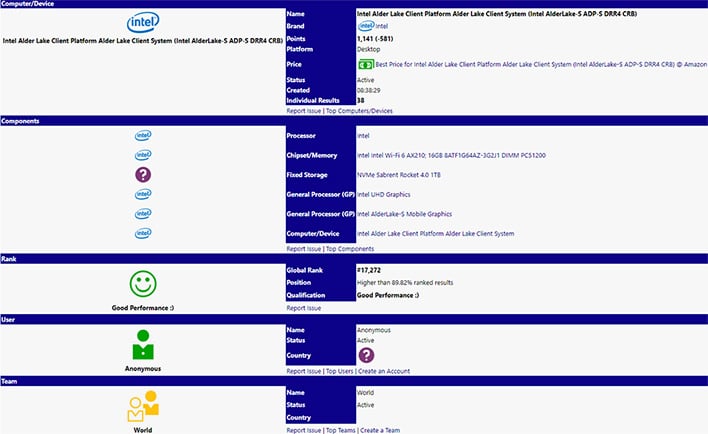 There are some interesting details in the full listings. For one, it recognizes this desktop processor as having 16 cores and 32 threads clocked at 1.4GHz. Since this is a hybrid design, the most likely configuration is 8 Golden Cove cores and 8 Gracemont cores, each capable of Hyper Threading, hence the 16 total cores and 32 total threads.

The listing also points to there being a generous 30MB of L3 cache, along with 10x 1.25MB of L2 cache. And after that, things get strange. For example, the listing indicates "DRR4" memory. That is almost definitely a typo and should probably say "DDR4," which itself is a bit disappointing with SK Hynix today having launching the world's first DDR5 DRAM modules.
Even more puzzling, the listing identifies as the platform as using "Intel AlderLake-S Mobile Graphics." Unless Intel is suddenly veering off course with its model nomenclatures, then Alder Lake-S will be a desktop line, just like every previous processor family with an "S" attached. So where does the mobile graphics come into play?
It could be another typo, possibly related to the driver. After all, this is still a relatively early stage, given that Alder Lake-S won't launch until sometime in 2021.
The last interesting thing is the inclusion of Sabrent's Rocket 4 1TB SSD. That is an NVMe drive that is capable of leveraging the PCI Express 4.0 bus, which lends credibility to rumors that Alder Lake-S would adopt PCIe 5 support, which obviously would offer backwards compatibility with PCIe 4. Rumors have also indicated DDR5 support, so we are not ruling that out either, no matter what this listing says.
Alder Lake-S is shaping up to be an intriguing launch. Regardless of the exact specifications, the hybrid design is interesting all on its own, as it remains to be seen what benefits it will ultimately bring to the desktop.