Intel's upcoming Sapphire Rapids 4th Gen Xeon server CPUs, expected to compete with AMD's upcoming Epyc Zen 4 processors, are not even released yet. However, the company is already looking further ahead with Granite Rapids, Intel's 6th Gen Xeon platform, which is likely in the pipeline for 2023 or 2024.

At the Intel Innovation 2022 Taipei event, Intel showed off some of its forthcoming datacenter technology with Sapphire Rapids and support for DDR5-5600MT/s, as we showed you here as well in our early preview testing. Sapphire Rapids will also support eight channels of DDR5 memory, CXL 1.1, and PCIe 5.0. However, what's perhaps more interesting, though, is a slide Intel put up that showed an Intel Xeon Scalable Processor running a single DIMM per channel (1DPC) DDR5 at 6400 MT/s. 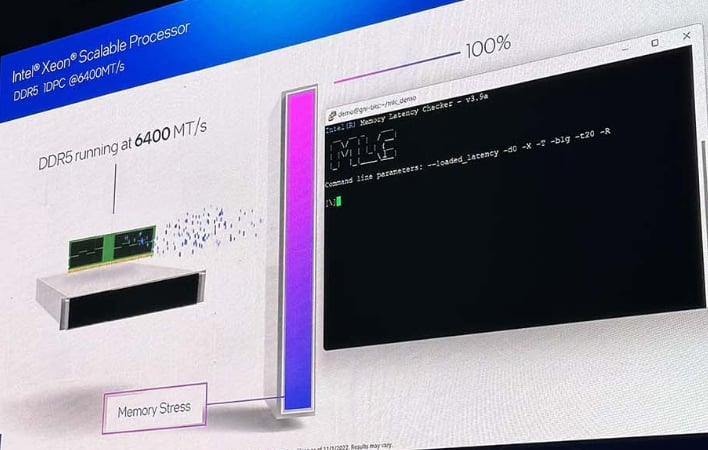 Per leaks and information seen previously, Intel's Emerald Rapids line of Xeon processors will only support up to 5600 MT/s DDR5 in a 1DPC configuration. Therefore, does this mean that Intel potentially showed off its future Granite Rapids platform without any other context? Beyond this interesting tidbit, we do not know much about Granite Rapids as it is still a bit further down Intel's roadmap. Despite this lack of information, it is expected that Intel will move from the Intel 7 process node to the Intel 4 node with Granite Rapids, which is expected to be ready for shipment sometime in 2023. Of course, Intel is being rather tight-lipped about all of this, so we can only speculate on the upcoming Xeon family and hope for more exciting leaks in the future. In the short term, we can look forward to AMD's EPYC Zen 4 Genoa Server CPU coming on November 10th, followed by Intel's Sapphire Rapids general availabiltiy on January 10th. Thus, stay tuned to HotHardware for all the updates and coverage of upcoming product series.