Mobile GPUs are cool and all, but everyone wants to see the high-end halo product. A GPU that can run games in 1080p without drawing a lot of power is probably a lot more practical than a high-end processor that can pump out a hundred 4K frames every second, but it's just not exciting.

That's why we're so interested in two tidbits of data that Intel accidentally included in its video about Intel Arc Control, which is what it is calling its overlay and driver control panel. Intel would probably rather not see comparisons like this, but it's impossible to ignore the similarities between Arc Control and AMD's own Radeon Software.


Not that that's a bad thing; AMD's Radeon Software is pretty cool, and just like the Red Team's application, Arc Control lets you monitor GPU and game performance in real-time with an in-game overlay, as well as control and configure features like post-process sharpening without exiting your game. 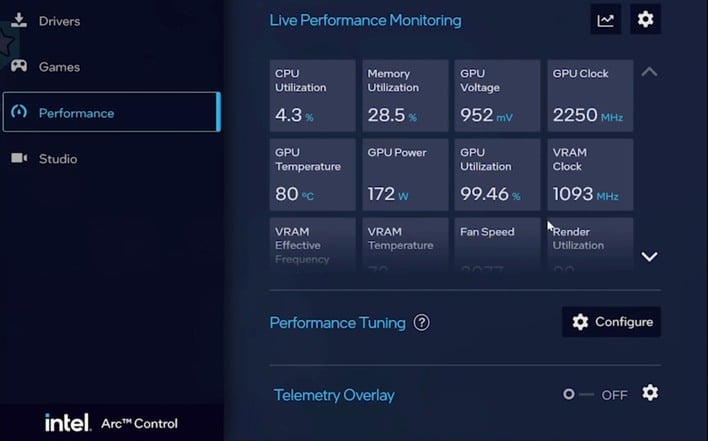 As part of the video, presenter David Nassau quickly flips through the Arc Control UI while playing the early access cooperative shooter Arcadegeddon. In a blink-or-you'll-miss-it moment, you can spot the UI showing a GPU clock of 2250 MHz and a "GPU Power" of 172 watts. Those certainly aren't specs for the Arc A380M.

Indeed, if we look at the announced Alchemist parts, the shown specs—including a memory clock of just 1093 MHz—don't match up even remotely to any of the promised graphics processors. Such a low memory clock only makes sense if we're talking about GDDR6X memory, which gives an effective data rate fully 16 times faster than its clock rate. Multiplying 1093 by 16 gives us a data rate of 17.5 Gbps.


So a circa-175-watt GPU that runs at 2250 MHz and has 17.5 Gbps GDDR6X memory—well that's starting to sound pretty beefy. It's possible Mr. Nassau was simply using a high-end Alchemist GPU when doing his capture and forgot to hide the specs, but it's also entirely possible that he intended for this data to be released for sharp-eyed enthusiasts to notice.

We've put the specifications together in this convenient little chart that compares it against high-end competition from teams both Red and Green. None of these parts will likely line up exactly in terms of gaming performance, but it gives you an idea of what sort of region Intel is striking for with this part.

Certain things on the chart are assumptions. The screenshot shows a "GPU Power" of 172 W, which we're assuming is for the GPU core itself. It's likely that the thirsty GDDR6X memory as well as the board's power delivery mechanisms will have some cost as well. We'd typically expect a 175-W-class GPU to have a total board power of around 225 watts.

It's important to remember that paper specs don't mean everything, or even necessarily anything. Intel's graphics team has a lot to prove with this first-generation of Arc graphics cards. Nobody would reasonably expect them to shoot for the performance crown with their first shot, so the upper-midrange market seems like a savvy target. We'll see if they've hit the mark in early Summer.