We have known since last year that Intel's upcoming Alder Lake-S desktop processors will not only introduce a heterogeneous design similar in concept to Arm's. big.LITTLE approach, but also a new socket. Intel documents revealed early on that Alder Lake-S would leverage an LGA 1700 socket. Otherwise known as Socket V, some leaked details about the design have emerged, as well as information about a sub-zero cooler.
What you see in the image above is Cooler Master's MasterLiquid ML360 Sub-Zero cooler. Designed in collaboration with Intel, it features a water block with thermoelectric cooling (TEC) technology, a redesigned pump assembly, and a 360mm radiator. Otherwise known as a Peltier cooler, the idea was to bring a big chill to Intel's Comet Lake and Rocket Lake processors, especially the top (and toastiest) models. 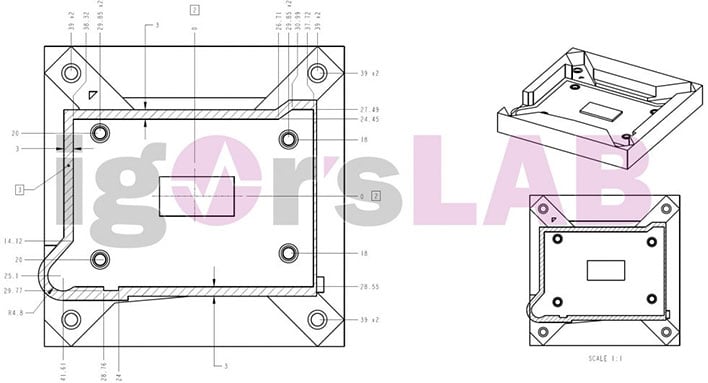 These coolers never became all that popular in the modern era, but it looks like Intel is not giving up on them. Igor Wallossek, a reliable leaker, shared a series of sketches related to Intel's upcoming LGA 1700 socket and various cooler designs, one of which shows a locking clip for another TEC cooler. Whether it actually makes sense remains to be seen.
In theory, Alder Lake-S should improve thermals compared to Intel's existing processors. For one, Intel is shifting to a 10-nanometer process, and secondly, the hybrid architecture entails combining high performance cores with power efficient cores on the same die. TEC-type coolers have not been required up to this point, and as far as Wallossek is concerned, it is "simply impractical."
Be that as it may, TEC-type coolers will not be the only option, of course. Retail boxed air coolers with Intel's push-pin design will accommodate Alder Lake-S. However, you might not be able to re-use your existing cooler with Alder Lake-S, regardless of whether it is an air cooler, an all-in-one liquid cooler, or a custom liquid cooling loop.

LGA 1700 is a brand new socket, and if the leaked information is accurate, then Intel deliberately altered the hole patterns for the screws and backplate that hold everything in place, by a few millimeters. Normally this would not be an issue for a modern cooler—many of them are designed in such a way that it is just a matter of adjusting the universal mounting assembly and calling it a day. But it might also require cooler makers shipping out updated brackets, if they so choose.

There are other considerations too. One is the fact that Alder Lake-S will be more rectangular in shape, so you really want a cooler that is designed to make ideal contact with the elongated IHS (integrated heatspreader). How much that really comes into play remains to be seen.
It's also said there will be a change in height. The alteration to the socket design means Alder Lake-S will sit lower than Intel's existing processors. This isn't necessarily a problem when it comes to re-using existing coolers, but it could be, depending on the specific design.
So there are multiple design considerations to take into account, as it applies to compatibility with existing coolers versus having to buy another one.
Answers will come before the end of the year, as Intel has stated it will release Alder Lake-S in 2021. Rumor has it we're looking at a November launch.