Earlier this month, we received sneak peeks at Intel's upcoming Frost Canyon family of NUC 10 Mini PCs. The first leak gave us a listing of all of the upcoming SKUs, while the second leak gave us a look at the slightly refreshed chassis design.

Today, however, Intel has officially pulled the wraps off its NUC 10 family, confirming all of the previous leaks (hat tip to FanlessTech). All of the NUC 10 PCs are using Intel's new Comet Lake-U processors, which were first announced over the summer. Comet Lake-U is still built on the latest version of Intel's long-running 14nm process node and is available in Core i3, Core i5, and Core i7 flavors for the NUC 10 family. The specific processors available -- depending on the SKU chosen -- include the following:

No matter which process you choose, you'll find an HDMI 2.0a port on the back along with GbE, two USB 3.1 ports (Type-A) and a Thunderbolt 3 port. On the front of the chassis, you'll discover two USB 3.1 ports (one Type-A, one Type-B). On the side of the chassis is an SDXC slot with UHS-II support. Internally, the slim chassis models support a single NVMe PCIe SSD, while the thicker models support both an NVMe PCIe SSD and a 2.5-inch SATA SSD/HDD. There are also two DDR4-2666 memory slots and support for Optane Memory. 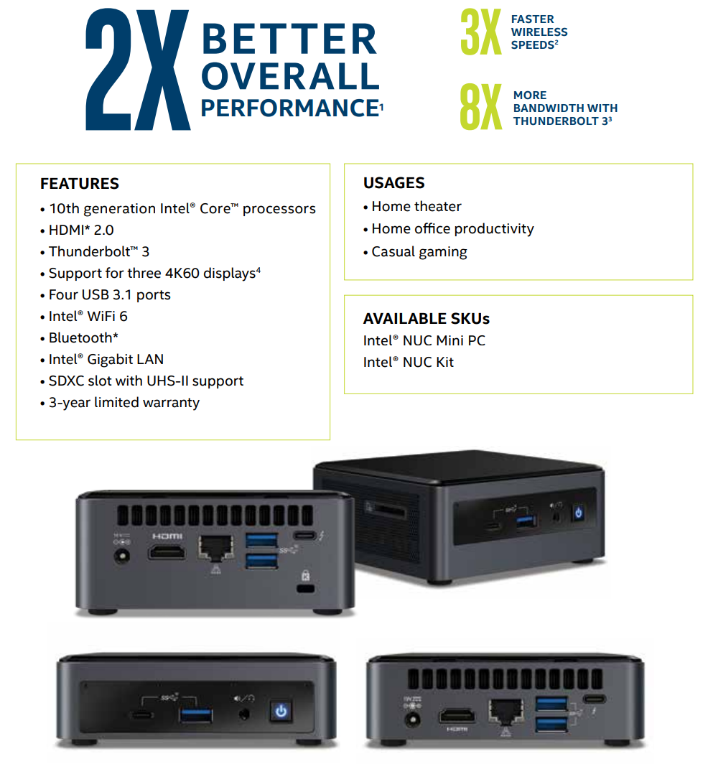 Like all of its other NUCs that it has offered in the past, Intel provides both Kit and Mini PC SKUs, with the former simply being barebones systems without memory, storage or an operating system. The Mini PC SKUs are available with up to 16GB of DDR-2666 RAM, up to a 256GB NVMe PCIe SSD, up to a 1TB SATA HDD, up to a 16GB Optane Memory module, and [optional] Windows 10 Home preinstalled.

Intel has not announced official pricing or availability at this time, but says that each of its NUC 10 PCs will come backed by a 3-year warranty.