Even though we have had our first glimpse of Intel's Xe graphics architecture courtesy of a reference laptop with Tiger Lake inside, there are still many questions yet to be answered. Like what specific Xe products will ultimately manifest? As it relates to that, there is another question—will there be a dual Xe GPU solution, as a new benchmark leak appears to suggest?
Before we go down wade into those leaky waters, let's go over the Xe hierarchy that Intel set out during its Architecture Day this past summer. Intel laid out a GPU strategy for Xe that spans from integrated and entry level graphics solutions, all the way up to high performance computing (HPC), with a version of Xe on pace to power an exascale supercomputer.
Here is the Xe GPU totem pole, as it currently exists...
Xe LP is the foundation, and it will be offered as a discrete GPU solution, in addition to being integrated with Tiger Lake. it all seems pretty straightforward, but there is an intriguing entry in the SiSoftware SANDRA database that points to a dual Xe LP GPU solution. Have a look... 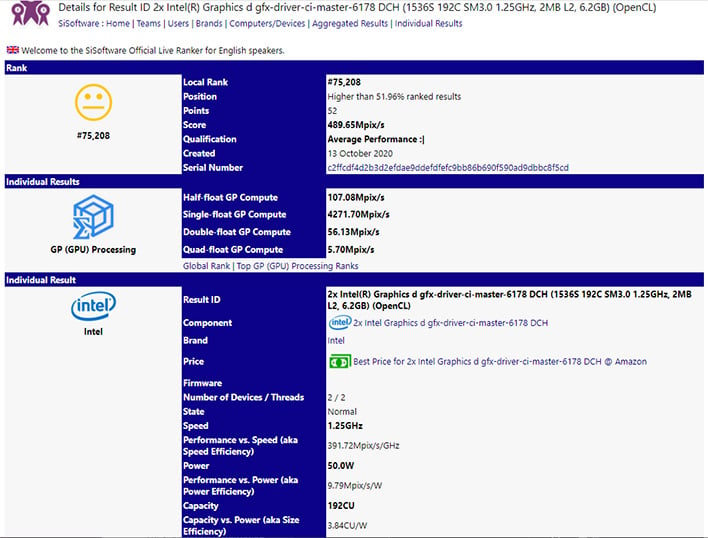 According to the database entry, what we have here is a dual Xe LP GPU with 192 total execution units (EUs), or 96 EUs each. That equates to 1,536 streaming processors (cores). The listing also identifies the clockspeed as being 1.25GHz, which seems rather low, though the dual GPU configuration is obviously more interesting than the clockspeed. Other specs include 6.2GB of memory and 2MB of L2 cache.

Is this a real configuration, or is SANDRA simply mis-reading the data? We can't say for sure, obviously, but it does lend itself to some interesting speculation. Consider that Intel's discrete DG1 solution is rumored to sport 96 EUs, while Tiger Lake-U's graphics tops out at 96 EUs as well. Incidentally, the database entry pegs this as a Tiger Lake-U client platform.

What does that mean? Maybe not much...OR it could possibly indicate that the integrated Xe GPU in Tiger Lake-U is working in tandem with a discrete DG1 card, hence the dual-Xe designation and convenient math (96 + 96 = 192).
We are not saying that is for sure what we are looking at, only that it is a possibility. This could also be a separate, more powerful solution that Intel is testing, and has yet to announce. Whatever it is, color us intrigued.