Intel's upcoming Alder Lake CPUs are still a few weeks away from launching, presumably, but there is plenty of related hardware in the wild to keep the leaks flowing. The latest one is an actual photo (read: not a render) of a next-generation LGA 1700 socket, as shown above. It looks similar overall to LGA 1200, but there are some key differences.
For one, Alder Lake is a longer CPU that is more rectangular in shape that Rocket Lake, and so the LGA 1700 socket design has to account for that. This is in large part due to the hybrid makeup of Alder Lake—Intel is pairing Golden Cove cores for high-performance computing with more power efficient Gracemont cores into a single package.
The photo above was posted by a user on the Bilibili forum. As a frame or reference, I've cropped a picture of an LGA 1200 socket from the ASUS ROG Strix Z5j90-E Gaming motherboard and put them side-by-side. Have a look... 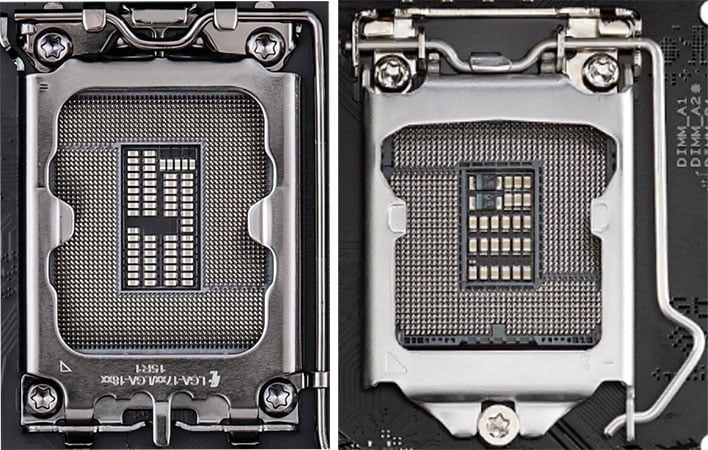 Bear in mind that these are not true to scale. However, it does show the thinner and longer profile of Intel's pictured LGA 1700 socket (left) compared to its LGA 1200 socket (right). As far as measurements go, previously leaked details suggest Intel's upcoming LGA 1700 socket (codenamed "15R1) is 7.5mm longer, while the width is unchanged at 37.5mm.
Being an LGA (Land Grid Array) design, the pins remain in the socket itself, as opposed to being on the CPU. Incidentally, it is rumored AMD will eventually go this route as well, specifically with Zen 4, which is said to employ an LGA 1718 socket.
Intel's LGA 1700 socket is also said to sit a tad lower than LGA 1200. If past leaks are correct, it will have a Z-height of 6.529mm, compared to 7.31mm on LGA 1200 and 115x sockets. Along with other alterations, cooler makers will need to provide a new set of brackets for current models, if they want to maintain compatibility.
One other interesting tidbit—at the top of the socket, we can see "LGA-17xx/LGA-18xx" etched into the metal. That suggests there are 100 extra pins on LGA 1700 that are not being utilized in Alder Lake, but will be used for Raptor Lake.
As for Alder Lake, rumor has it Intel will launch its 12th Gen Core CPUs in late October, and offer them up for sale in November. In the meantime, at least one reputable retailer in the US (Provantage) has begun taking preorders.