In what could very well be the coolest thing you see today, a notorious modder delidded a Core i9-12900K processor from Intel's newly announced Alder Lake stack, and provided a detailed video tour of the chip's makeup. That in and of itself is geektastic, but adding to the awesome-sauce, he also took some measurements, showed a custom delidding tool being fabbed, and highlighted some interesting bits around the CPU. Oh, and have you ever seen a cat use a processor as a pillow? That's in the video, too.

This all came about after Roman "der8auer" Hartung made an admittedly "lazy" mistake on his Alder Lake test bed and killed his Core i9-12900K chip. While mounting an all-in-one cooler with his system powered up and running (a big no-no), he dropped a screw from the cooler's mounting kit onto the motherboard, and the Core i9-12900K paid the ultimate price.
Fortunately for us, der8auer decided to turn lemons into lemonade (or chips into chips and dip?), and gave his dead Alder Lake CPU new purpose by having it star in a delidding video. If you have 16 minutes to spare, definitely check this one out...

Intel already said it is using a thin layer of solder underneath the integrated heatspreader (IHS), and that is confirmed in the delidding video. While it might be hard to discern from the video and image posted up top, Intel is using less solder this time around, as part of an optimized package for purportedly better thermals. This also entails a thinner a die, and a thicker IHS compared to Rocket Lake and Comet Lake.
Also seen the image up top is the gold plating inside on the underbelly of the IHS. This is something that has been included on past designs, but in this particular sample, the "position of the gold plating is somehow strange," as it sits off-center. This could be on purpose for some reason, or a manufacturing hiccup on whatever batch this chip came from (and may not matter). 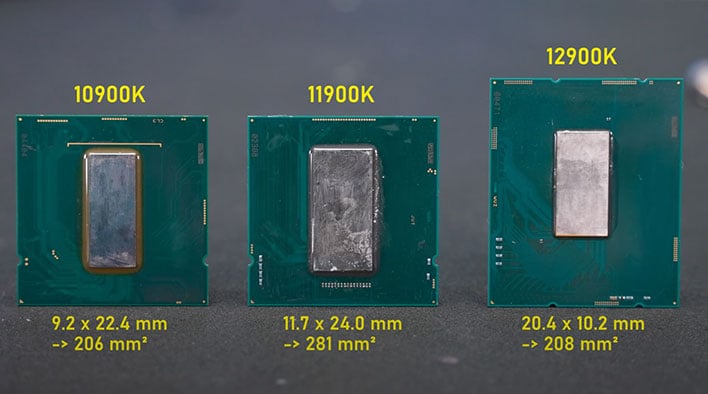 He also took a bunch of measurements, some of which you can see above. The PCB on the Core i9-12900K is more rectangular than Intel's past processors, measuring 45mm long, compared to 37.5mm on the Core i9-11900K and Core i9-10900K. As for the CPU die, der8auer measured around 208mm2, which is a little bit smaller than past CPU dies.
The die height is different, too. By his measurements, it's 0.46mm, making it around 22 percent thinner than the Core i9-11900K (0.56mm).
There's more to spy in the video, including SMD capacitor placement and measurements, a close look at the different shapes and sizes of the gold pin contacts, and some other goodies. If you have a coffee break coming up, watching the delidding video is a splendid way to spend it.
Images courtesy of der8auer