Each passing day seems to bring with it a leak of some kind related to Alder Lake, the heterogeneous architecture that will power Intel's next round of processors. And so it goes this weekend—there are a couple of interesting benchmark entries highlighting the performance of Intel's not-yet-released Core i9-12900K processor, in an also not-yet-released Z690 motherboard.
Let's talk about the CPU first. The Core i9-12900K is expected to sit atop the Alder Lake stack. As confirmed during the recent Intel Architecture Day 2021 event, Alder Lake will scale up to 16 total cores, including eight performance (Golden Cove) and eight efficient (Gracemont) cores, and 24 threads (two threads per performance core, and one thread per efficient core).
So being a flagship part, we know the Core i9-12900K wields the full configuration of cores and threads, along with 30MB of L3 cache. Clock speeds and other details have not been officially confirmed, but based on past leaks, we are looking at a 3.9GHz base clock and up to a 5.3GHz turbo frequency for the performance cores.
The processor showed up in a couple of PugentBench database entries, showing the performance in After Effects. These are based on custom benchmark schemes Puget Systems uses to test its own systems, and has made available to the public. 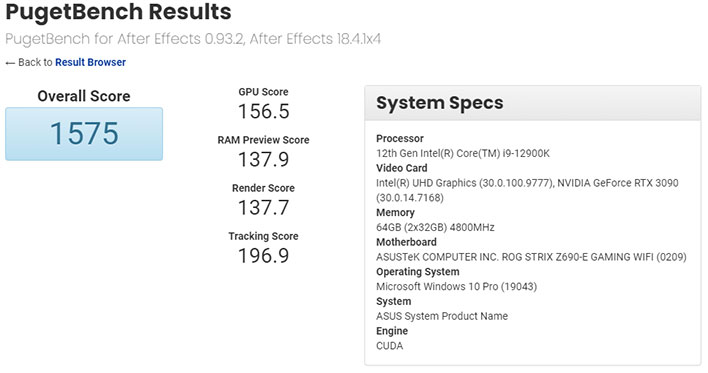 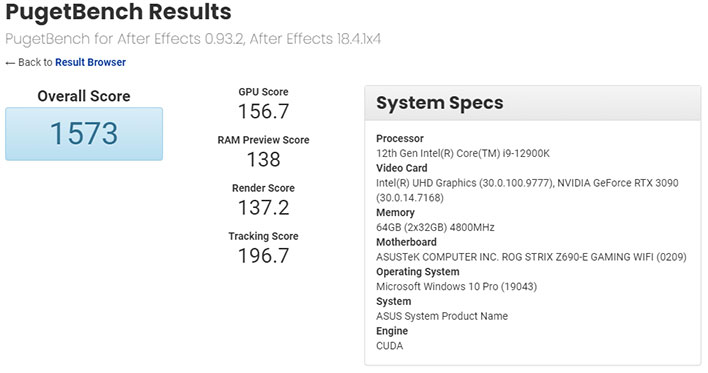 There's a second entry where the same test setup scored slightly less, at 1,573 for the overall score. The individual results (GPU score, RAM preview score, render score, and tracking score) were all very close to one another between two benchmark runs as well.
A couple of things make these benchmark entries notable. One is that they're based on a next-gen platform based on what is likely to end up a popular motherboard, built around Intel's upcoming 600-series chipset. The current generation ROG Strix Z590-E Gaming WiFi is a high-end motherboard with a 14+2 power stage design and oodles of amenities, and we expect the Z690 version to also bring the goods.
Secondly, the numbers were obtained while running Windows 10 Pro instead of Windows 11. This matters, because as we have seen ourselves, Windows 11 is better suited for hybrid architectures, mainly due to tweaks made to take advantage of a new hardware resource on board Alder Lake called Thread Director. So there is likely some performance left on the table here (and that's not including the impact of finalized drivers when Alder Lake actually ships).
Disclaimers aside, these scores give us points of comparison. The best benchmark run for an Intel Core i9-11900K based on Rocket Lake is shown above. It's slotted into an ASUS ROG Maximus XIII Hero motherboard with 64GB of DDR4-2133 RAM and a GeForce RTX 3090, and posted an overall score of 1,548.

The RAM is much slower (and slow even for DDR4 territory), but in lieu of a true apples-to-apples comparison (or as close as can be had when comparing Alder Lake to Rocket Lake), it's interesting to see how a pre-release configuration stacks up with the best score from an existing platform. And it's a mix.
We see Alder Lake posting a strong overall score that is around 1.6 percent better and a render score that is impressively 11.4 percent higher, but also losing in the tracking category by 7 percent. So make of all that what you will.

There are too many variables at play here to draw any kind of conclusion, other than needing to wait for Alder Lake to ship in order to see how performance truly compares. And to that end, Alder Lake will be here before the end of the year.