Within a matter of months, Intel will introduce its first Alder Lake processors, effectively marking a near wholesale transition to hybrid computing, and kicking off the DDR5 memory era. From an official standpoint, SKUs and specifications are still a mystery. Unofficially, however, leaks and rumors paint an interesting picture, the latest of which details a supposed Core i9-12900K processor.
What about this hybrid architecture, you say? Intel dipped its toes into hybrid waters with Lakefield, but will really embrace heterogeneous computing in the x86 space with Alder Lake. This comes by way of combining high performance Golden Cove cores with power efficient Gracemont cores in the same package.
This is going to lead to different core and thread counts that what we are accustomed to seeing. Such is the case with a claimed Core i9-12900K engineering sample. A user on the NGA.cn forums says they are in possession of the chip, which is said to feature 8 Golden Cove cores with Hyper Threading support and 8 Gracemont cores (which lack Hyper Threading).
That makes it a 16-core/24-thread CPU (8 Golden Cove cores + 8 Golden Cove threads + 8 Gracemont cores). And according to the user, it has a 3.9GHz base clock and a 5.3GHz turbo frequency.
Assuming the information is accurate, being an engineering sample means the specifications could be different than what ends up shipping. We could see higher or lower clocks on the finalized silicon. As it stands, however, the user claims the CPU scores around 11,300 in Cinebench R20. It's hard to tell from the Google Translation, but the quoted score appears to be an estimate, based on what was obtained at a lower frequency.
So it is not the most reliable leak in the world. A score of 11,300 would be mighty impressive, though. To put it in context, a 16-thread/32-core AMD Ryzen 9 5950X based on Zen 3 scores around 10,400 in Cinebench R20. The Core i9-12900K scores around 8.6 percent higher, according to the forum post. 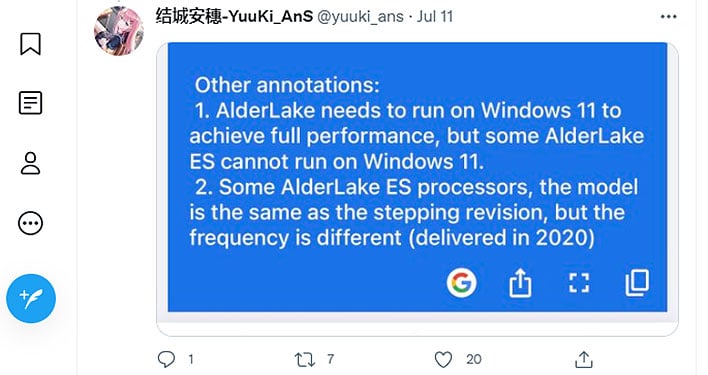 In related news, another leaker (@yuuki_ans) claims that Alder Lake needs to run on Windows 11 to achieve its full performance potential, though some ES chips are not able to run on Windows 11 for some reason.
Speaking to the former point, it's not hard to believe. Windows 11 is rumored to bring big scheduling improvements to the fold, and in our own testing with a Lakefield CPU, we saw a notable performance boost in Windows 11 compared to Windows 10.
In any event, this latest leak is another encouraging sign for Alder Lake, especially with the uncertainty surrounding what to expect from a heterogeneous architecture on the desktop, as opposed to mobile (where's Arm's big.LITTLE designs have thrived). We'll find out for sure by the end of the year, as Intel has said Alder Lake will arrive in 2021.