Alder Lake is putting on quite a show in leaks, though obviously we can only glean so much from unconfirmed reports and benchmark runs. For now, those are all we have to go on, until Alder Lake arrives in earnest later this year. That said, a fresh leak has Intel's upcoming Core i9-12900K processor climbing above 30,000 points in Cinebench R23.
That is a monstrous score, no doubt. Whether it is a legitimate benchmark run or not, time will tell. But if it is, then the Core i9-12900K is going to bring some big time multi-threaded performance to the table when it launches, perhaps surpassing AMD's flagship Ryzen 9 5950X, which itself is no slouch. This is not the only leak that suggests this might be the case, it's just the newest one.
Have a look... 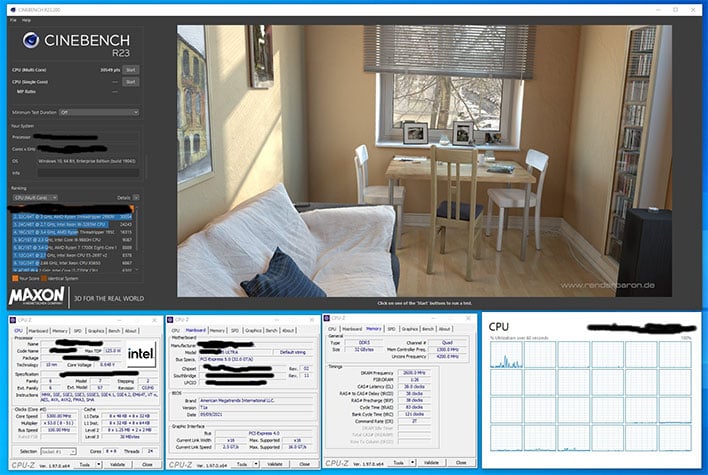 This is not without some red flags. The screenshot was posted by a new user to Twitter by @hw_reveal (REWHK), so there's no real track record to scrutinize. There are a few fields that are covered up too, presumably to protect the user's source. To our knowledge, this would also be the first showing of a Core i9-12900K processor in CPU-Z.
Putting those things aside, we're left with what is claimed to be Intel's flagship Alder Lake processor running in a Gigabyte Aorus Z690 motherboard, with 32GB of DDR5-5200 memory. CPU-Z shows the processor running at 5.3GHz, and this gave it a Cinebench R23 score of 30,549 in the multi-threaded test.
Let's plot it on a graph with our own benchmark results... 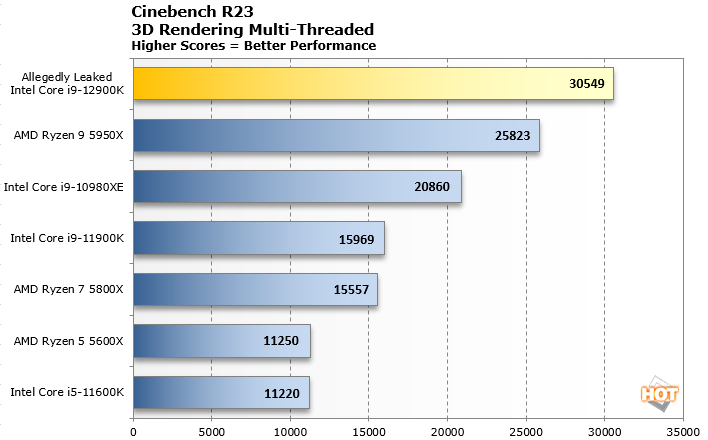 The leaked score is 18.3 percent higher than what we achieved on AMD's best silicon in our Ryzen 9 5950X review. And it is a staggering 91.3 percent higher than what we benched with Intel's current flagship, in our Core i9-11900K review. Based on this result alone, Alder Lake leaves both Zen 3 and Rocket Lake in the dust.
Will it really, though? Yesterday we wrote about another leak showing the Core i9-12900K coming out way ahead of the Ryzen 9 5950X in a leaked Ashes of the Singularity benchmark. There are plenty of caveats that apply to that one as well. Nevertheless, in the early going, Alder Lake looks like it is going to be a contender.
Regarding the specs, the Core i9-12900K is a 16-core chip split evenly between eight high-performance Golden Cove cores and eight power-efficient Gracemont cores. The big cores support Hyper Threading, so it amounts to a 16-core/24-thread configuration. The Ryzen 9 5950X, meanwhile, is a 16-core/32-thread processor.
While nothing is yet confirmed, in terms of performance, the early leaks suggest the combination of Intel's Thread Director hardware and Window 11's better management of hybrid architectures is paying dividends. Stay tuned.