It is still going to be a couple of weeks before the bulk of reviews arrive on Intel's newly minted 11th Gen Core "Rocket Lake-S" desktop processors, ours included. Feeling impatient? A spattering of leaked benchmarks provide a possible teaser into what Rocket Lake-S will bring to the table, including some figures for Intel's Core i9-11900KF.
The Core i9-11900KF sits at the top of the stack, next the Core i9-11900K (non-F model). Both share the same core CPU specifications, just the KF model lacks onboard graphics and can be had for a little less money (Intel's recommended pricing in 1,000-tray quantities of $513 for the Core i9-11900KF versus $539 for the Core i9-11900K).
It's an 8-core/16-thread processor, which is as high as Rocket Lake-S goes, with a 3.5GHz base clock and up to a 5.3GHz turbo clock (single-core via Thermal Velocity Boost). The chip also features 16MB of L3 cache and has a 125W TDP. It's also already found its way to CPU-Z's benchmarking database. Have a look... 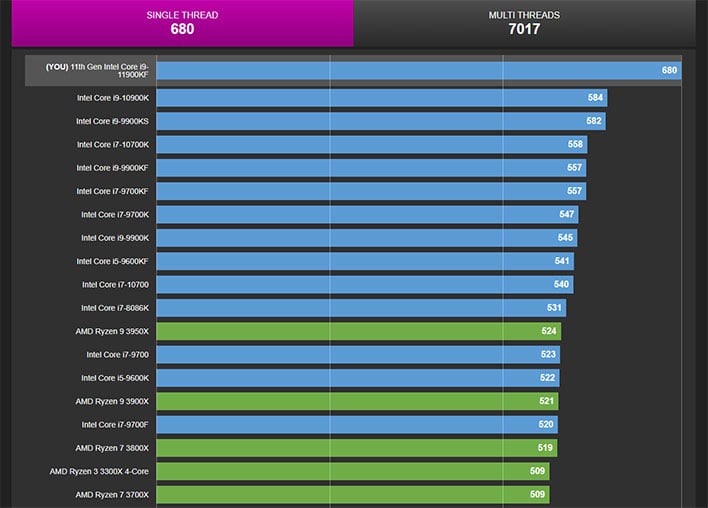 Intel is claiming Rocket Lake-S delivers a 19 percent IPC (instructions per clock) performance boost. In this leaked benchmark, we see the Core i9-11900KF score around 16.4 percent higher than the previous generation Core i9-10900K in single-threaded performance. Bear in mind that is not an IPC measurement—to accurately measure the IPC gain, both would have to be running at the same clockspeed in the same system.
Be that as it may, a single-threaded comparison is relevant because not all chips are created equal, and it shows what kind of gain the Core i9-11900KF can potentially deliver in real-world performance. And in this instance, it's a healthy 16+ percent boost over the 10-core/20-thread Core i9-10900K.
Unfortunately, the graph doesn't include any results for AMD's Ryzen 5000 series. Compared to the Ryzen 9 3950X, though, Intel's latest CPU scored nearly 30 percent higher in the single-threaded test.
There are also some leaked Cinebench scores for the Core i9-11900KF...

We're not seeing any Cinebench entries for this chip at HWBot, but apparently they were listed there at some point, and captured in a screenshot by APISAK, a prominent leaker on Twitter. Once again, we're mostly interested in single-thread performance. Looking around the web, AMD's Ryzen 7 5800X scores just a few points below 1,600 in Cinebench R23, giving the Core i9-11900K a slight edge.
That slight edge comes at a higher power draw. Nevertheless, the leaked benchmarks seem to indicate Intel has closed the gap on what is yet another iteration of its 14-nanometer manufacturing process.
This translates over to multi-core performance as well. In the same benchmark, the Ryzen 7 5800X scores 15,245, according to data collected by CPU-Monkey. The Core i9-11900KF scored around 6.9 percent higher.
Just keep in mind that this is all leaked data. Additionally, it's a very small snapshot, even if the results end up being accurate. Be sure to stay tuned for our own benchmark figures and in-depth analysis in a couple of weeks.