It appears as though Intel's upcoming NUC 11 Extreme "Beast Canyon" kit is now in the wild, as it has made an apparent 3DMark benchmark cameo, with a newfangled Tiger Lake-B series processor in tow. According to two separate listings, the Beast Canyon system is also wielding a full-size NVIDIA GeForce RTX 3060 graphics card, 16MB of DDR4 memory, and a 1TB WN Black SN750 NVMe SSD.
You may recall that Intel teased its Beast Canyon NUC during this year's virtual Computex event. At the time, Intel was short on details, saying only that it will be available with 11th Generation Core i9, i7, and i5 processors, and will support full-length graphics cards, including NVIDIA's latest generation GeForce RTX 30-series and AMD's Radeon RX 6000 series.

Then more recently, a photo and details of Intel's upcoming NUC were posted to Twitter. It was said to feature a Core i9-11900KB processor, which is one of a handful of Tiger Lake-B CPUs that Intel quietly added to its portfolio a couple of weeks ago.
As things stand, the newly minted Tiger Lake-B series consists of four models, including the Core i9-11900KB, Core i7-11700KB, Core i5-11500B, and Core i3-11100B. These are essentially desktop models in ball grid array (BGA) form, that are soldered directly to the motherboard. They also features some decently fast clocks.
Regarding the Core i9-11900KB specifically, the top-end model is an 8-core/16-thread CPU with a 3.3GHz base clock, 4.9GHz max turbo frequency, and a 5.3GHz Thermal Velocity Boost clock. It also sports 24MB of L3 cache, Intel Xe graphics with 32 execution units clocked at 350MHz to 1.45GHz, and a configurable 55-65W TDP.

What about the 3DMark leak? Let's have a look... 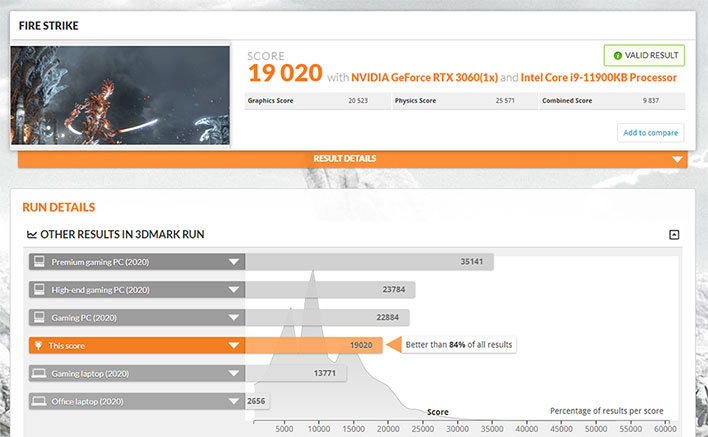 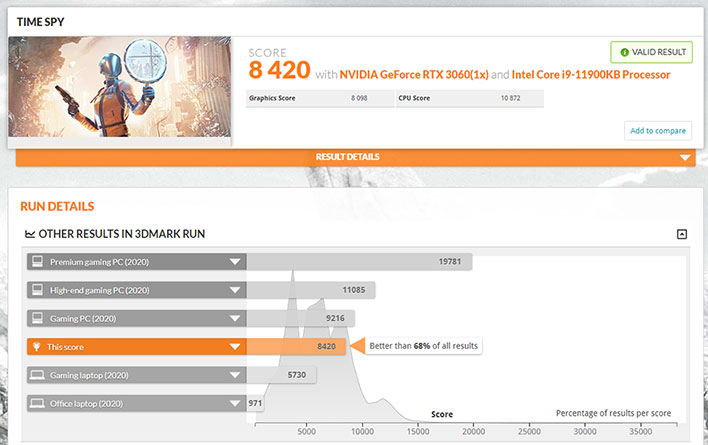 Both listings identify the motherboard as an "Intel Corporation NUC11DBBi9," leaving little doubt that someone benchmarked a Beast Canyon NUC. This suggests a launch is likely right around the corner at this point, especially with the aforementioned leaked photograph of the actual system making the rounds on Twitter.
Looking at the performance numbers, it gets tricky to compare because (A) we did not benchmark this system, so we are relying on someone else's effort and can't be 100 percent sure of the settings, and (B) 3DMark's database is a little unwieldy to navigate. That said, we found an entry for a desktop PC with a Core i9-11900 and GeForce RTX 3060, that appears to be running at stock clocks. Here's how the Time Spy scores break down...
The Beast Canyon NUC trails a bit in this particular comparison, though not by a whole lot. It's also a short of list of systems that pair a Core i9-11900 with a GeForce RTX 3060, and we used the top scores for this comparison.
A similar situation plays out in Fire Strike...
What we see here is Tiger Lake-B performing very close to Rocket Lake, which bodes well for Intel's BGA stack, and its Beast Canyon NUC. While not a tiny system, the Beast Canyon NUC is certainly on the compact side, and looks to deliver some big performance. Now we just have to wait for it to release.