Intel is sticking with its 14-nanometer node for one more generation of desktops CPUs, that being its 11th Gen Core lineup based on Rocket Lake-S. However, the company is also claiming a big boost in IPC (instructions per clock) performance. As in, to the tune of 19 percent. If the latest leak is any indication, Rocket Lake-S is going to bring the boom.
Despite being another iteration of 14nm, Rocket Lake-S is a major architecture upgrade over Comet Lake-S, with Cypress Cove cores underneath the hood. In addition to a enticing IPC gain, Rocket Lake-S also brings some feature upgrades to the table, like PCI Express 4.0 support (which will mostly benefit users who want to install an ultra-fast PCIe 4.0 SSD).

One of the chips on tap is the Core i9-11900K unveiled at CES 2021. It will rank as the flagship part, sporting 8 cores and 16 threads clocked at up to 5.3GHz. But how fast it is really, with PC workloads? A cameo on Geekbench suggests it's very fast. Have a look... 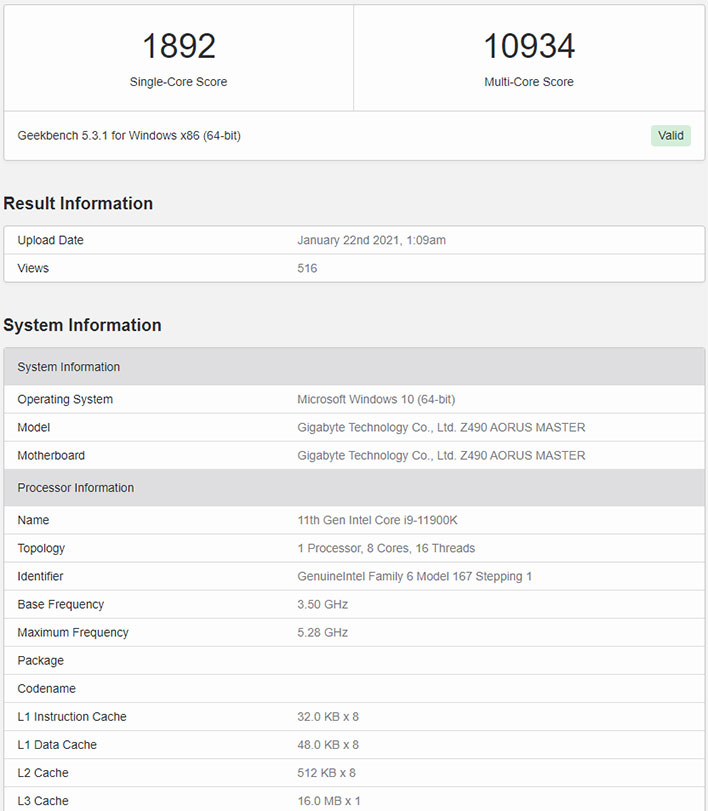 The chip is nestled into a Gigabyte Z490 Aorus Master motherboard with 32GB of DDR4 memory. It's possible that newer Z590 motherboards could eek out even more performance from the Rocket Lake-S chip, but as things stand, the single-core score of 1,892 is mighty impressive.
How impressive, exactly? It's around 30 percent higher than the typical single-score score for a 10th Gen Core i9-10900K (Comet Lake-S), the chip it will be replacing. Bear in mind that single-threaded performance is not the same as IPC. That said, if the leaked benchmark run is an accurate reflection of the Core i9-11900K, then enthusiasts are in for treat.
This also bodes well for Intel's effort to compete with AMD's line of Zen 3 CPUs, at least for single-threaded workloads. Have a look at this... 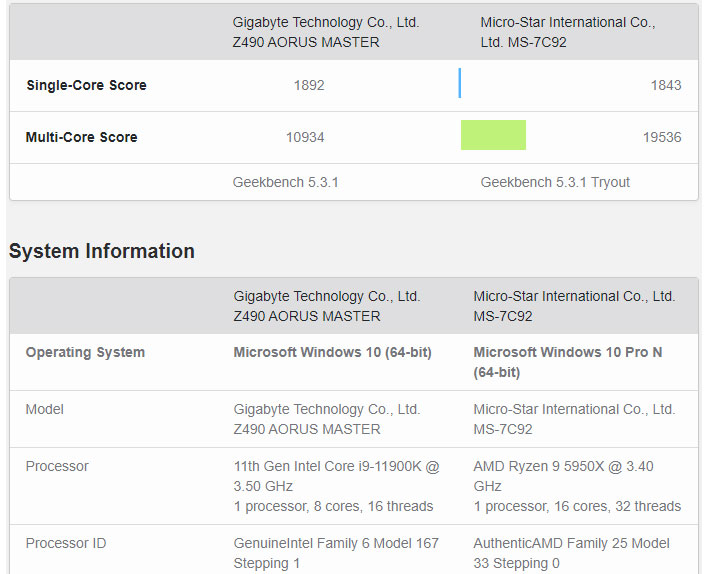 Going up against AMD's top Zen 3 part, the Ryzen 9 5950X, the Core i9-11900K is able to post a higher single-threaded score. And that's actually one of the highest scores for the Ryzen 9 5950X—Geekbench shows it averages 1,682. Compared to the average, the Core i9-11900K's score is 12.5 percent higher.
Of course, AMD is on track to launch Zen 4 before the end of the year. But when Rocket Lake-S arrives in a few weeks, it will give AMD's current parts a run for their money in certain workloads. Where AMD will still have the advantage, however, is with programs that make good use of multiple cores and threads. Intel is capping its Rocket Lake-S series at 8 cores and 16 threads, where as mainstream Zen 3 CPUs top out at 16 cores and 32 threads.