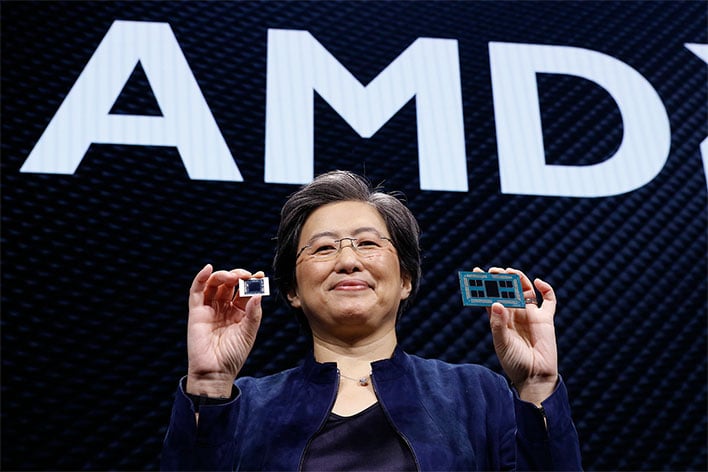 AMD is in the midst of one heck of a run. Remember the company's Bulldozer architecture? It's ancient history at this point, and scores of gamers and PC users in general are clamoring for the company's latest generation Ryzen 5000 series CPUs, based on its Zen 3 architecture. They're fresh from the oven and in short supply. Be that as it may, AMD took a moment to talk about what it is cooking up next—Zen 4 and Zen 5.
This is the perfect time to discuss such things. That may seem quirky with Zen 3 being so new, but future plans are always topics of discussion during CES week. AMD's future plans have added interest because Intel has confidence that its 11th Gen Core desktop processors (Rocket Lake-S) will deliver gaming superiority.
Also of interest is the fact that Intel today announced that CEO Bob Swan is stepping down, and will be replaced by Pat Gelsinger, who currently serves as CEO of VMWare. A change in leadership could potentially put Intel on less shaky ground, with regards to CPU delays, node transitions, and things of that nature.
That is all to say, AMD should not take its foot off the gas pedal. Not that it intends to. After AMD's recent keynote, the company held a round table discussion with certain members of the press. Apparently it asked that no outlet post a full transcript, so there is a mild bit of jumping around to get at the juicy bits.
To that end, a topic that came up is AMD's design philosophy as it relates to personnel, to which Dr. Su talked about the focus shifting to upcoming architectures to remain "extremely competitive."
"Mark, Mike, and the teams have done a phenomenal job. We are as good as we are with the product today, but with our ambitious roadmaps, we are focusing on Zen 4 and Zen 5 to be extremely competitive," Dr. Su said, according to Anandtech. "Bets are made, and we track the progress."
Dr. Su's message is that there are teams hard at work on Zen 4 and Zen 5 in the CPU space, and RDNA 3 in the graphics space. But where exactly will the performance increase come from? Part of it will be from a shift to 5 nanometers and what that will enable.

On that topic, Eric Jhonsa from The Street spoke with Rick Bergman, executive vice president of AMD's computing and graphics group. He asked Bergman point blank if the performance gains from Zen 4 will come from a boost in IPC (instructions per clock), core counts, or clockspeeds.
"The maturity of the x86 architecture now, the answer has to be, kind of, all of the above. If you looked at our technical document on Zen 3, it was this long list of things that we did to get that 19 percent [IPC gain]. Zen 4 is going to have a similar long list of things, where you look at everything from the caches, to the branch prediction, the number of gates in the execution pipeline. Everything is scrutinized to squeeze more performance out," Bergman said.
AMD has already confirmed that Zen 4 will be built on a 5nm node, and Zen 5 is likely to be there as well (an enhanced version). Bergman touched on that as well, saying the shift to 5nm "opens an additional door for us to [obtain] better performance per watt and so on, and so we'll take advantage of that as well."
Of course, comparing nodes between AMD and Intel is not as simple as just looking at the number and concluding that the lower value is better. There is quite a bit more that is involved when comparing, say, Intel's 10nm with AMD's 7nm. But while we're not going to jump into the intricacies of it all here, the larger point is that AMD continues to benefit from node shrinks for its own designs, and that is on pace to continue through the next couple of architectures.