It looks as though Intel's 14-nanometer node will go out on a high note, if the latest leaked benchmarks are any indication. Over at PassMark Software's CPU Mark database, Intel's upcoming Core i9-11900K now sits at the top of single-threaded performance chart, climbing above the Core i7-11700K (second place) and AMD's latest generation Ryzen 5000 series (third through sixth place).

For anyone who has been out of the loop, Rocket Lake-S represents one last major hurrah for 14nm on the desktop, though it is not a rehash of Comet Lake-S. It's a major new architecture featuring Cypress Coves cores. Cypress Cove is essentially a back-port of Willow Cove, which underpins Intel's 10nm Tiger Lake mobile CPUs.
According to Intel, its 11th Gen Core desktop processors based on Rocket Lake-S will deliver up to a 19 percent IPC (instructions per clock) improvement over its 10th Gen Core desktop chips. The Core i9-11900K and Core i9-11900KF (no integrated graphics) figure to be the flagship SKUs. Here is the latest run in the CPU Mark benchmark test... 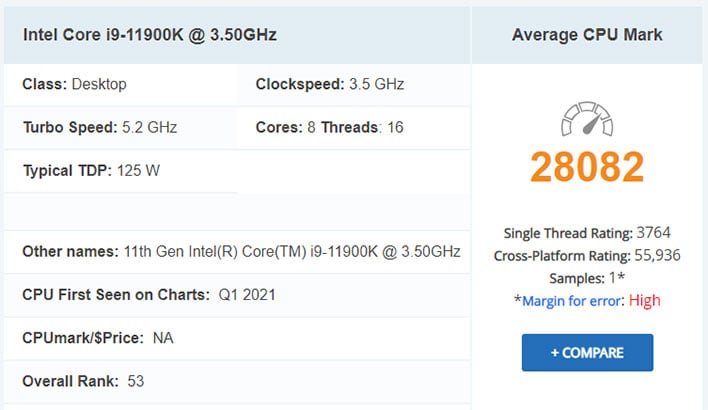 We already know that Rocket Lake-S will top out at 8 cores and 16 threads, rather than 10 cores and 20 threads like Comet Lake-S. Intel also divulged that single-core boost clocks will top out at 5.3GHz, and all-core clocks (with Thermal Velocity Boost) will boost up to 4.8GHz, depending on the SKU.
This CPU Mark entry correctly identifies the Core i9-11900K has having 8 cores and 16 threads. It also shows the chip as having a 3.5GHz base clock and 5.2GHz boost clock. Thermal Velocity boost will kick that up a tick higher, but on the surface, this looks like a legitimate entry (though we obviously can't say with 100 percent certainty that it is).
What is really impressive, though, is the single-threaded ranking. Have a look... 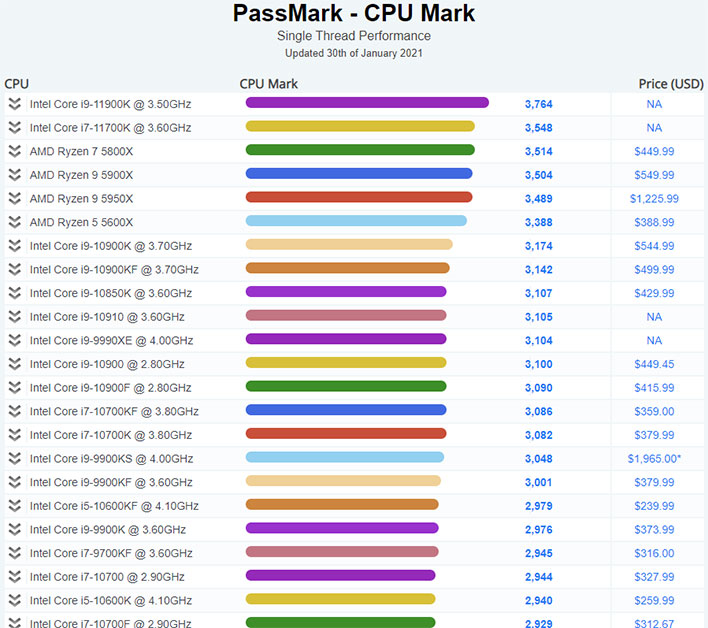 The Core i9-11900K takes the top spot, climbing a little over 7 percent higher than the best scoring Zen 3 chip, the Ryzen 7 5800X, and jumping nearly 19 percent ahead of the 10th Gen Core i9-10900K. Bearing in mind that single-threaded performance is not the same as IPC, the gain here is roughly in line with expectations, if Intel's claims ultimately hold true.
We'll have to wait and see how things actually turn out. However, if going off these and other leaked benchmarks, it appears that Intel will overtake AMD in single-threaded performance, which could pay dividends in certain workloads. Gaming is one of them, though some games are better about tapping into multiple cores and threads, where AMD will still have the advantage the upper end (Zen 3 scales to 16 cores and 32 threads among the mainstream lineup).
Of course, AMD is not standing pat. Every indication up to this point is that Zen 4 is still on track to launch late this year. Same goes for Intel's Alder Lake platform, both of which will shift to using DDR5 memory. Let the fun begin.