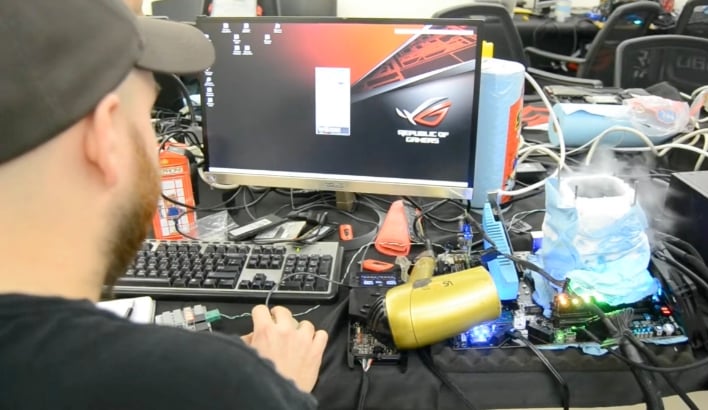 Intel’s Core i9-10900K is no doubt an impressive chip, made even more impressive by the fact that the company has been able to achieve 5GHz+ turbo clocks in a 10-core design using 14nm process tech well past its “freshness” date. We posted our review of the chip earlier today and we were able to get the chip to 5.3GHz across all 10 cores with a Corsair H80i AIO liquid cooler.

But a 5.3GHz all-core overclock is small potatoes compared to famed overclocker Elmor, who was able to hit 7.7GHz (7707.62MHz to be exact) across all 10 cores. For reference, the base clock of the Comet Lake-S based Core i9-10900K is 3.7GHz, so this represented a whopping 4GHz overclock. Of course, an off-the-shelf liquid cooling solution couldn’t be deployed to achieve this overclock; instead, Elmor and his team ran the chip at 1.194V and used liquid helium to keep it cool.

The Core i9-10900K was installed in an ASUS ROG Maximus XII APEX (Intel Z490) motherboard. Comet Lake-S processors can’t be installed on 300-Series motherboards, as they necessitate a new LGA-1200 socket found with Z490. It’s rumored that LGA-1200 will only be used for two generations – Comet Lake and Rocket Lake – before Intel switches again to LGA-1700 with 12th generation Alder Lake processors.

Even without the insane overclocks, we found the Core i9-10900K to be a compelling flagship processor at its $488 price point. It’s consistently the fastest processor that you can purchase for gaming, but those who sway more towards content creation may want to take a hard look at the cheaper 12-core AMD Ryzen 9 3900X.