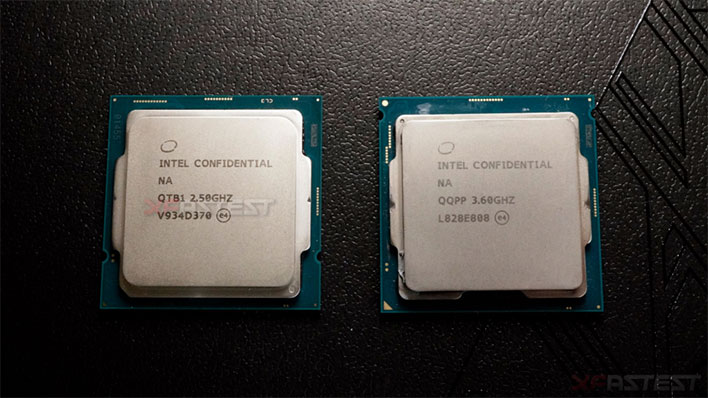 There have been a plethora of leaks pertaining to Intel's upcoming Comet Lake-S processors for the desktop, and as the new chips get closer to launch, actual images of the CPUs have surfaced. Even better, these are not the typical low quality, blurry photos that have become an annoying practice with leaked images.
The process in question is a Core i9-10900 (non-K model), as shown on the left in the image up top. In that particular photo, it's plopped next to a current-generation Core i9-9900KS (Coffee Lake) CPU. Both of those are engineering samples (ES), which are essentially pre-release silicon that Intel sends to reviewers, OEMs, and hardware makers to validate their platforms. 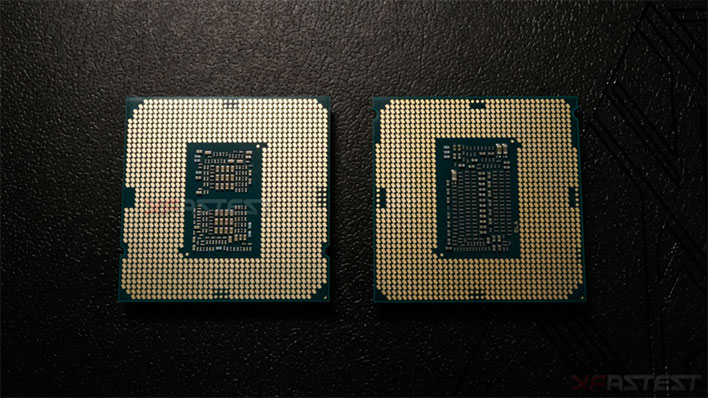 With the same two processors flipped over (Core i9-10900 on left, Core i9-9900KS on right), we can see how the pin arrangement will differ in upcoming Z490-chipset motherboards. For the Comet Lake-S lineup, Intel is moving to a new socket—LGA 1200. That means a new motherboard will be required to run a Comet Lake-S processors.
According to XFastest, which posted all of the images, existing LGA 1151 coolers will have no issue mounting to LGA 1200 motherboards. We'll have to wait and see if that is accurate across the board.
The site also says the Core i9-10900 is a 10-core/20-thread processor. That's consistent with previous leaks. Interestingly, past leaks also peg the part as having a 2.8GHz base clock, while the chip in the images above is stamped with "2.50GHz" on the integrated heatspreader (IHS). It's possible that the final silicon will be faster than the ES chip, though it's also possible that past leaks are wrong (or that things have changed).

Intel has not yet announced a release date for its Comet Lake-S lineup, though rumor has it they will arrive in mid-March.