Intel and AMD are arming themselves with an updated arsenal of mobile CPUs, but which one will win the war? That remains to be seen. As we await the next-gen skirmish, however, more leaked benchmarks have emerged. This time the focus is on Intel's upcoming Comet Lake-H series, and specifically the 10th generation Core i9-10880H.
Comet Lake represents another iteration of Intel's 14-nanometer node. Low power models for ultrathin laptops have already launched, including the Core i7-10710U and several others, but we are awaiting more powerful variants, both for the desktop (Comet Lake-S) and beefier laptops (Comet Lake-H). Rumor has it they finally debut in mid-March.
Meanwhile, AMD at CES 2020 unveiled its Ryzen 4000 mobile series, including U-series for ultrathin laptops and H-series for more performance laptops. The Ryzen 7 4800H competitively aligns with Intel's Core i9-10880H, at least as it pertains to cores, threads, and the target audience.
Regarding the leaked benchmark data, Twitter user APISAK once again discovered a couple of interesting Geekbench database entries, both for the Core i9-10880H. According to those listings, the Core i9-10880H sports 8 cores and 16 threads with a 2.3GHz base clockspeed, and 16MB of L3 cache. In one of the listings, the boost frequency is listed as 4.88GHz, and in the other it's listed as 4.94GHz.
Intel has talked about its upcoming H-series processors hitting 5GHz and higher on Core i7 models, so we're probably looking at a 5GHz boost clock here.
Here's a look at the faster clocked Geekbench entry... 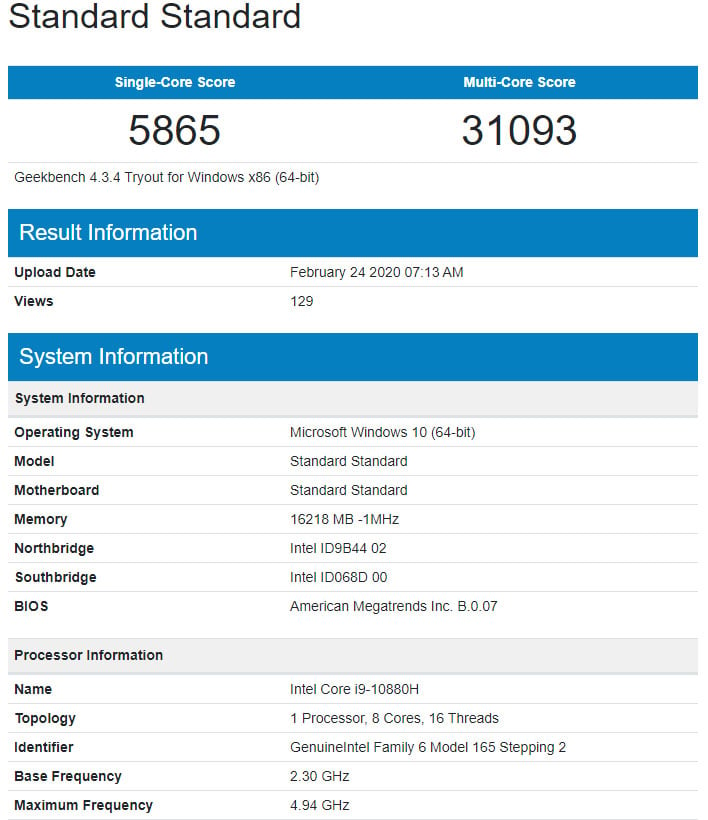 The scores between the two benchmark runs are similar, both of which were obtained on Geekbench version 4.3.4 on a system running Windows 10. Here's a look...
We see a slightly higher single-core at the faster boost clock and higher multi-core score with the slower boost clock. They're all fairly close, though.
We don't have any benchmark scores for the Ryzen 7 4800H to compare against. However, we can pit the Core i9-10880H against AMD's desktop Ryzen 7 3800X, just as a reference point. Scores are kind of all over the place on Geekbench, but if we go by one of the newest benchmark runs, here's how they compare... 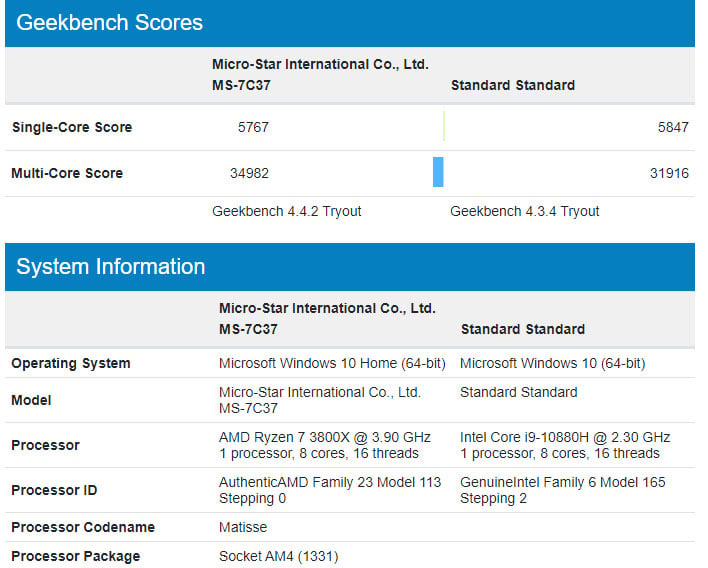 In this particular comparison, the Core i9-10880H stands tall, posting a faster single-core score and a competitive multi-core score.
Perhaps a better comparison to make is how the Core i9-10880H stacks up against Intel's existing Core i9-9880H, as found in the HP Omen 17 we recently reviewed, which offers the same number of cores and threads, with similar clocks (2.3GHz to 4.8GHz). Here's a look... 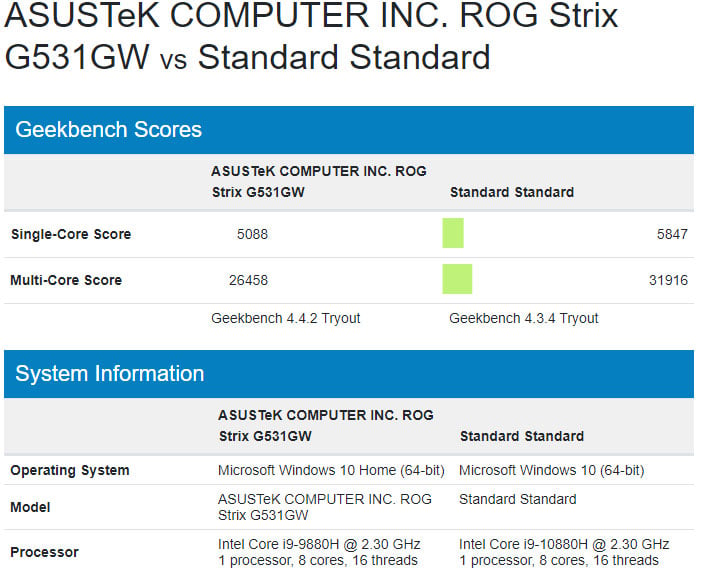 Here we see a decent jump in performance between the current generation Core i9-9880H and next-generation Core i9-10880H. The Comet Lake-H part posted a 15 percent higher single-core score, around a 21 percent faster multi-core score.
Obviously we can't read too much into leaked benchmark scores—there's no way of telling if the data is legitimate, and then we have differing platforms, drivers, and so forth to contend with. That said, there is at least reason to be optimistic about Comet Lake-H.