Another of Intel's upcoming 13th Gen Core Raptor Lake (RPL) processors for laptops appears to have broken cover. We have previously seen some powerful HX series mobile RPL chips (55W base power), but this one is apparently from the P series (28W base power), aimed at premium thin and light devices. Despite the lower base power, the leaked 14C / 20T Intel Core i7-1370P looks like it can run at up to 5.0 GHz.
The Geekbench online database contains an entry for a Dynabook (previously Toshiba) laptop. It doesn't have a model number or name, just a cryptic code for the motherboard. The Windows 11 device, however, is clearly stated to be running an Intel Core i7-1370P with 14C / 20T. Elsewhere in the system info section of Geekbench, we can see that the base frequency of the processor is 1.90 GHz, with a max boost of 5.0 GHz. The L3 cache is reported to be 24 MB. 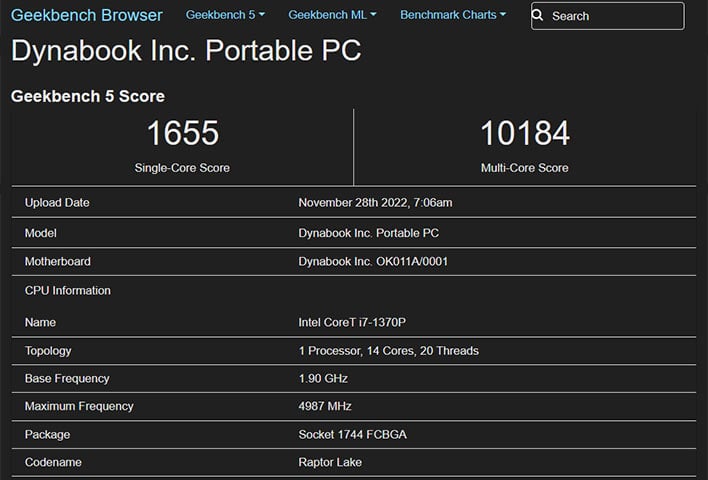 Moving on to the all-important performance achieved by the purported Intel Core i7-1370P, and we can see this sample of one achieves a headlining 1655 1T score, and a 10184 nT score in Geekbench 5.4.5. How does that compare to previous generation and alternative solutions at around the same TDP? Check out the comparisons below:

The new RPL-P processor has an edge on its predecessor and some selected 8C / 16T mobile processors from AMD, especially in the nT tests. The 6800U has a cTDP of between 15 and 28W, and the 6900HS has a slightly higher 35W TDP, which is still good for thin and light designs. Remember, the Intel ADL-P series 28W rating is the base power, and they can eat up to 64W when turbo is required. We don't yet have confirmed power variables for the 13th Gen Core Raptor Lake (RPL) processors for laptops.
Both the Intel Core i7-1270P and AMD Ryzen 6000 mobile chips were launched at CES 2022. We expect some upgraded parts, like the headlining i7-1370P which was spotted by Benchleaks, to be launched at CES 2023 in January.