We love to talk desktop hardware around here. Those are the high-powered parts, of course, with potent performance that puts up the big benchmark numbers. Even still, laptops make up a huge swath of the market, so we can't ignore those chips. Both AMD and Intel have new laptop processors on the horizon, but the ones that are the most interesting to gamers are the ones based on desktop-class silicon. Conveniently, both companies use "HX" branding to indicate this.

We'll start with the AMD chip. We already knew AMD would be bringing its desktop "Zen 4" parts to laptops with its "Dragon Range" family of processors, but the latest leak from the Ashes of the Singularity benchmark database would seem to be one such chip. Marked as a "Ryzen 9 7845HX," Ashes puts the chip down for 24 threads. Actually, the benchmark result lists 24 physical cores, but we suspect that's an error caused by the benchmark not recognizing the CPU architecture.

A twelve-core Zen 4-based laptop chip should be pretty impressive. We were certainly impressed by the performance of the Ryzen 9 7900X, which is the desktop version of that processor. The real questions will be what the final clock rates such a chip can achieve, and additionally, will there be a 16-core version? 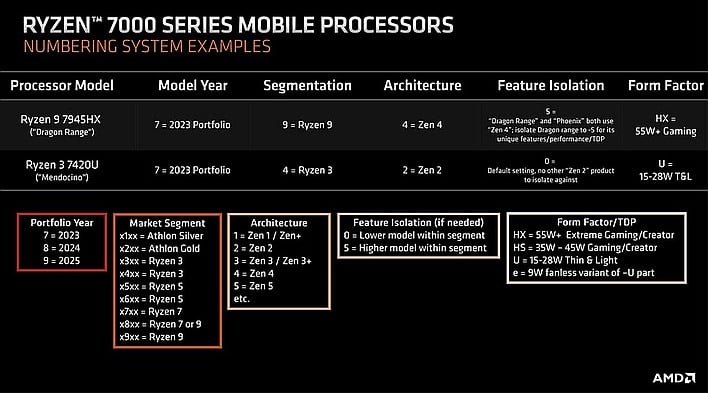 Given that AMD has already confirmed the existence of a Ryzen 9 7945HX in the above slide showing how to decode Ryzen CPU model numbers, we imagine so. It's difficult to imagine what kind of cooling apparatus could handle even a detuned version of the power-thirsty Ryzen 9 7950X inside a laptop, but stranger things have happened.

Over on the Intel side of things, regular leaker Raichu (@OneRaichu on Twitter) has posted what he purports to be a full model breakdown for the Raptor Lake "HX" series mobile processors. As a reminder, these chips are based on the same silicon as the 13th-generation Core desktop processors, just slightly detuned for mobile cooling. 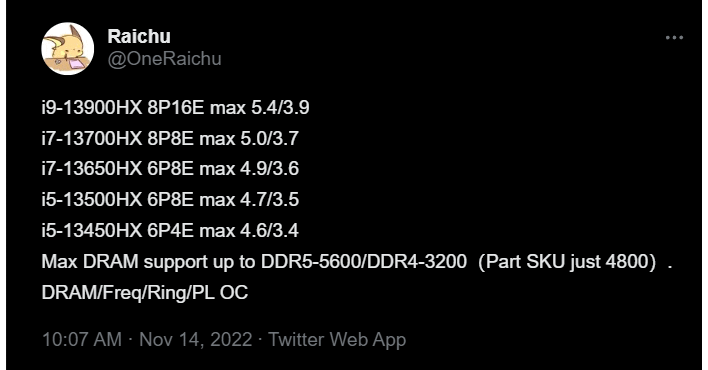 "Slightly detuned" isn't much of an exaggeration, either, looking at those clock rates. The top-end Core i9-13900HX supposedly drops just 400 MHz off of the max clock for both P-cores and E-cores compared to the 253-watt Core i9-13900K. Raptor Lake is actually surprisingly efficient, but we wonder what the base clocks for these laptop processors will look like.

Raichu also shares that these high-end laptop parts will share the same DDR5 memory specification as the desktop parts, which probably shouldn't be a surprise. However, supplies of laptop DDR5 parts running at 5600 MT/s are quite scarce at this time. Hopefully the existence of these parts will make faster DDR5 SODIMMs more available.

None of these chips are officially-announced yet, so we don't know when they'll appear or how much laptops sporting them will cost, but you can be sure we'll be reporting it as soon as we know.