We're not quite at the point where Alder Lake leaks are irrelevant, because if past rumors are true, we still have a couple weeks to go before Intel formally introduces its first 12th Gen Core processor lineup. Then after that, retail availability (and perhaps embargoes on performance data) is purportedly scheduled for November. In the meantime, a supposed Core i7-12700K processor has popped up in another benchmark leak.
According to past leaks and rumors, the Core i7-12700K is a 12-core/20-thread processor comprised of eight high-performance Golden Cove cores with Hyper Threading support and four power-efficient Gracemont cores. Each physical cores counts as a thread, so the math works out as such: 8 (big cores) + 8 threads + 4 (small cores) = 20 threads.
The chip is said to have a 3.6GHz base clock and up to a 5GHz turbo frequency across one or two cores, or 4.7GHz turbo clock across all eight Golden Cove cores. We'll have to wait and see if the final specifications match what has been put out on the web up to this point, but given how close we are to launch, the metrics are probably accurate (or at least not far off).
While we wait to find out, here is a look at the latest round of leaked benchmarks, this time from PugetBench... 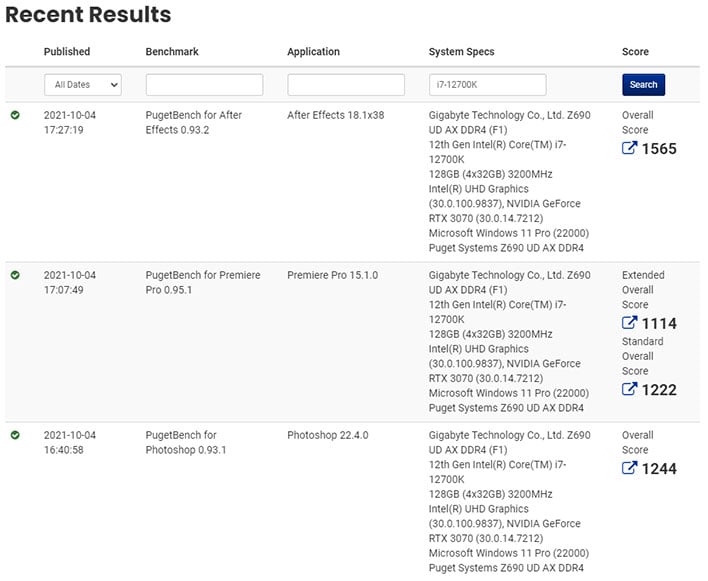 The results have been yanked offline, but not before the page could be cached and archived by the Wayback Machine. What we get is a rather interesting combination of hardware. Namely, a whopping 128GB (4x32GB) of DDR4-3200 RAM, which is notable because Alder Lake supports both DDR5 and DDR4.
It's also paired with a Gigabyte Z690 motherboard and a GeForce RTX 3070 graphics card, according to the archived benchmark listing. This combination yielded an overall score of 1,565 in the After Effects test.
Here's how that compares to the fastest scores from other CPUs within PugetBench's database...
Performance comparisons for the benchmarks (these and others) are problematic because they're not entirely weighted on the CPU. But if nothing else, this gives us a bit of rough assurance that Alder Lake is at least on the right track, as the pair of leaked scores are above the best ones obtained for existing hardware. If they were unusually low, it would be cause for concern, but that's not the case.

Really though, we'll have to wait for these chips to launch to know where they truly stand. And along those lines, it will be interesting to see how DDR5 and DDR5 affect performance. Stay tuned.