Imagine putting a screen door on a submarine, then submerging it in the ocean. Now imagine the entire submarine is just one big screen, not just the door. If such a thing existed, we would call it Comet Lake, because the leaks are pretty much constant. Whether any of them hold water remains to be seen, but as far as the latest leak goes, an unreleased Intel Core i7-10700KF has made appearance at SiSoft SANDRA.
Once again, we can credit Twitter user APISAK for drawing attention to the latest leaked entry. The Core i7-10700KF is one of a whole bunch of Comet Lake processors that will be coming out sometime this year, and perhaps within the next few weeks. The "K" in the product name indicates it is an unlocked processor, and "F" means it lacks integrated graphics (for anyone wondering).
So, what does the listing tell us? Let's have a look... 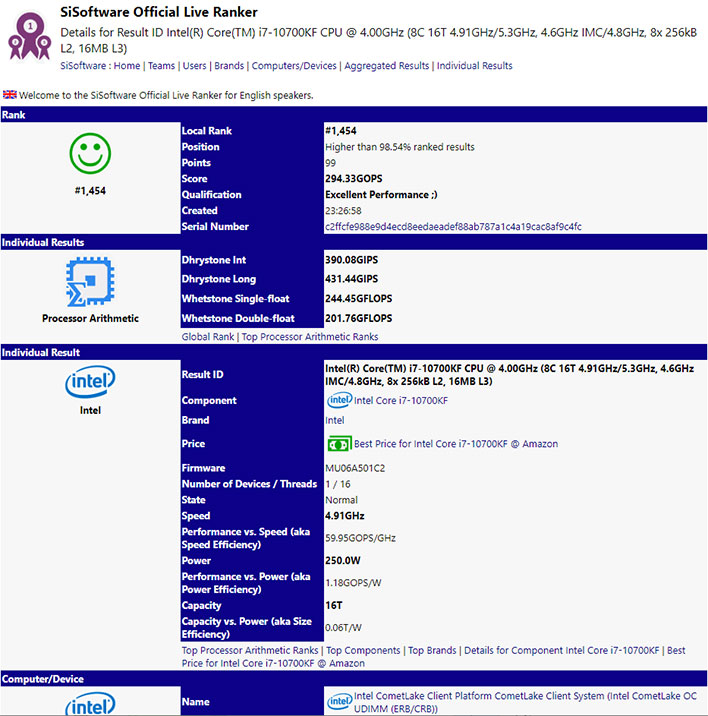 Starting with the specifications, the database entry lists the Core i7-10700KF as having 8 cores and 16 threads with a 4GHz base clock and 5.3GHz max boost clock, and 16MB of L3 cache. It also indicates a 250W power draw. Are any of those specifications actually accurate, though?
Well, past leaks have also pegged the Core i7-10700KF as being an 8-core/16-thread processor with 16MB of L3 cache, though that is where the similarities end. Prior leaks suggest the Core i7-10700KF has a 3.8GHz base clock and 5.1GHz max boost clock, and a 125W TDP.
It's possible SANDRA is misreading the chip. Likewise, this is likely an engineering sample (assuming it's real in the first place), and depending on when it came out, the specifications could be different than what ends up shipping. There is also the possibility of overclocked settings.
Intel has already said its 10th generation processors will push to 5GHz and beyond on the Core i7 family, though as far as we know, this is the first leak to show the Core i7-10700KF hitting 5.3GHz. Past rumors have suggested only the Core i9-10900K and Core i9-10900KF will hit that speed.

What about performance? It's always tricking comparing SANDRA scores. However, Hardware Times pointed to an AMD Ryzen 7 3800X listing as a point of comparison. It has the same number of core and threads, with a 3.9GHz base clock and 4.5GHz boost clock.
In SANDRA, this particular entry posted a "performance vs. speed (aka speed efficiency)" cores of 65.78GOPs/GHz at 125W, versus 59.95GOPs/GHz for the Intel Core i7-10700KF at 250W (supposedly, anyway).
We're not willing to read too much into all this. Hopefully Comet Lake-S will arrive soon—rumor has it Intel will launch Comet Lake-S and Comet Lake-H processors around the middle of next month.