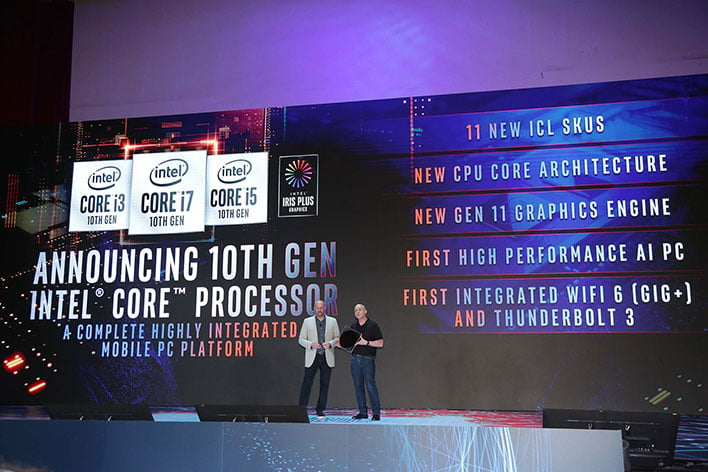 Someday and perhaps even this year (hopefully), Intel will launch desktop processors in volume that are based on 10-nanometer manufacturing. Until then, Intel continues to tweak its 14nm node. As is relates to that, Comet Lake-S will be shipping soon, which will presumably includes a Core i9-10900K CPU that is making cameos in benchmark leaks. Interestingly, one of those leaks shows it being faster than AMD's Ryzen 9 3900X.

The Core i9-10900K is a 10th generation Comet Lake-S processor that falls within Intel's 'mainstream' desktop processor lineup. That's to say, it's not a high-end desktop (HEDT) CPU, though it does wield a whole bunch of cores and threads. Specifically, it is a 10-core/20-thread CPU with 20MB of cache. From what we know, it will have a 3.7GHz base clock, 4.8GHz all-core turbo clock, and up to a 5.3GHz single-core turbo clock (via Turbo Boost Max 3.0).
Hitting those speeds will presumably require a lot of power. In this case, it is rated as a 125W TDP slice of silicon. However, there have been rumors of the Core i9-10900K potentially drawing north of 300W from the PSU when running full bore on all of its cores.

"Several motherboard manufacturers revealed that the 10-core [Intel CPU] breaks the 300-watt mark at maximum load. Not surprisingly, the 9900KS already exceeded the 250-watt mark in scenarios of this kind. This information has nothing in common with the TDP, which is rumored to be 125 watts," ComputerBase reported in January (translated text). 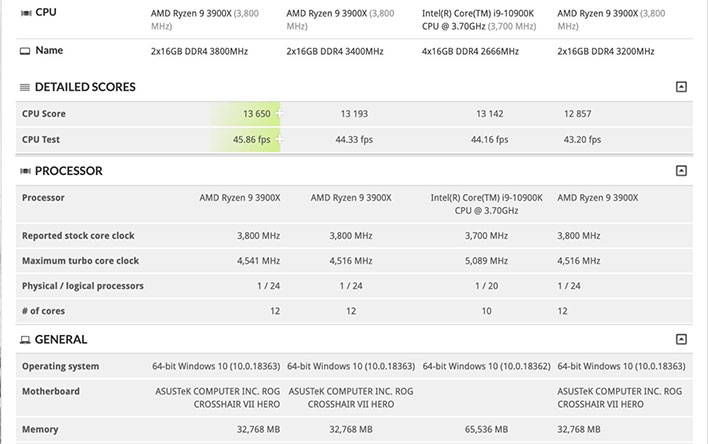 Power consumption aside, prominent leakers APISAK and _rogame posted some 3DMark benchmark results. Here's how APISAK's numbers break down...
In the Fire Strike benchmark, the Core i9-10900K with DDR4-2666 RAM is around 4.8 percent faster, and around 4 percent faster in the Time Spy benchmark. Meanwhile, the screen grab by _rogame shows the Intel chip beating AMD's silicon when the latter is configured with DDR4-3200 RAM, and losing in a separate benchmark run when it's configured with DDR4-3800 RAM (generally speaking, Ryzen benefits more from faster memory than Intel's chips do).

AMD's Ryzen 9 3900X is a 12-core/24-thread CPU with a 3.8GHz base clock and 4.6GHz max boost clock, with 64MB of L3 cache and 6MB of L2 cache. It has a 105W TDP.
In short, Intel's 10-core Comet Lake-S part is shown edging out AMD's 12-core Zen 2 CPU in certain situations, and losing in others. Higher boost frequencies are undoubtedly playing a role, and to get there, Intel's chip may have to draw significantly more power than AMD's processors. So there is the potential cost for a slight edge in gaming performance (as it relates to 3DMark).
Intel is likely to tout how its chips are the best for gaming, as it has been doing. Obviously there is more to the story than that. Power consumption, multi-threaded performance, and pricing all factor into buying decisions. For reference, the Ryzen 9 3900X costs $469.99 on Amazon. It's not clear what the Core i9-10900K will end up costing, though the 8-core/16-thread Core i9-9900KF runs $478.89 on Amazon right now.