Intel is making one final major push on its 14-nanometer node on the desktop (we think just one more, anyway), and with it comes a claimed 19 percent jump in instructions per clock (IPC) performance. Time will tell if upcoming Rocket Lake-S CPUs can deliver on the promise. Until then, various unreleased SKUs continue to find their way benchmark databases.
One of the latest leaks highlights the early performance of an 11th Gen Intel Core i5-11400 processor, paired with an MSI MPG Z490M Gaming Edge WiFi motherboard and 64GB of DDR4 memory (the RAM speed is not specified). Have a look... 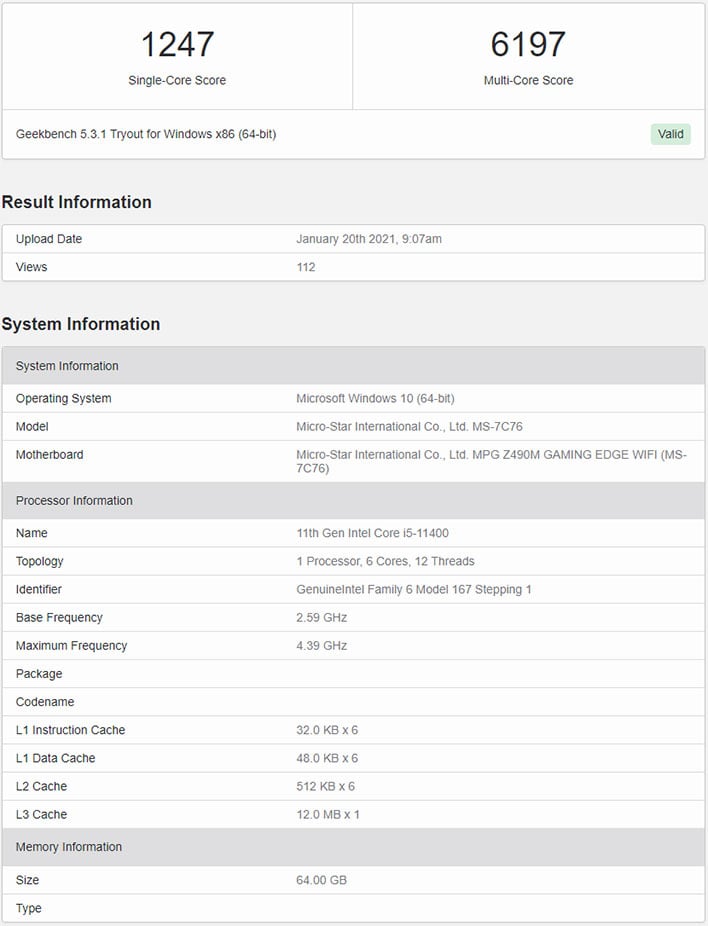 Consistent with past leaks, the listing recognizes the Core i5-11400 as having six cores and 12 threads, with a 2.6GHz base clock and 4.4GHz max turbo frequency. it also features 12MB of L3 cache. This will replace the Core i5-10400 (Comet Lake), which is also a 6-core/12-thread CPU, but clocked at 2.9GHz to 4.3GHz, with 12Mb of L3 cache as well.
Bearing in mind that this is probably an engineering sample, it is possible that some of the specs could change when finalized silicon arrives, and namely the clockspeeds. We'll have to wait and see. As it exists in this benchmark entry, however, it scored 1,247 in the single-core test and 6,197 in the multi-core test. How does that compare to the chip it is intended to replace?
As always, this is where things get tricky. Geekbench results have a tendency to be scattered. However, there is a recent listing highlighting a Core i5-10400 installed into an MSI MAG B460M Bazooka motherboard. It scored 1,125 in the single-core test, and 5,796 in the multi-core test.
Compared to those figures, the Core i5-11400K scored 10,8 percent higher in the single-core test and 6.91 percent higher in the multi-core test. Keep in mind that single-core testing is not the same as IPC. Additionally, performance is likely to improve further when Rocket Lake-S ships to the public, with new chipsets on the horizon too (like the Z590).
As it stands, these are impressive scores for an unreleased part without the benefit of a new platform. Incidentally, there is also a leaked benchmark listing for Intel's upcoming and higher end Core i7-11700, which scored just 438 in the single-core test and 2,215 in the multi-core test. What gives? For one, the listing shows the base clock and turbo clock both at 2.5GHz, so it seems the chip has been cut off at the knees. The bigger takeaway from that listing is that early Rocket Lake-S parts are in the wild, and seemingly on track to launch in a couple of months.