Intel is about to enter the high-stakes discrete GPU market, where it will face some stiff competition from NVIDIA and AMD, the two established players that dominate the space. The company will kick things off with Alchemist, its first Xe-HPG product. As we await its arrival, a mobile variant has made a cameo on a benchmarking website.
Obviously we can never be certain if leaks are accurate. But assuming this one is, it shows a Tiger Lake-H laptop configured with a discrete Xe-HPG graphics chip with 512 execution units (EUs). And for anyone who has not been following Intel's various GPU codenames, Xe-HPG is a high-performance variant that is optimized for gaming.
Here's a look at the leaked benchmark entry over at Geekbench... 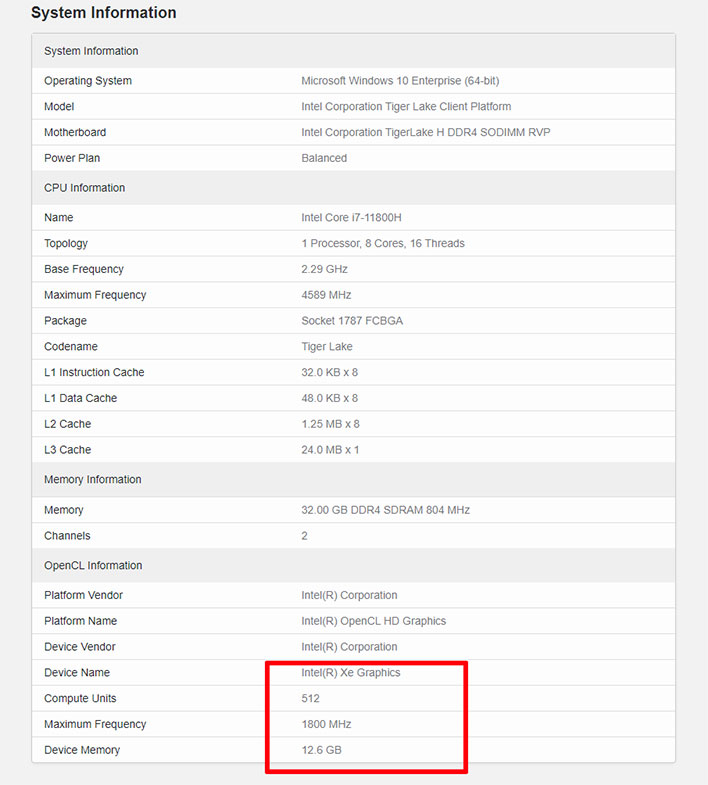 This is a Tiger Lake-H notebook with a Core i7-11800H processor and 32GB of DDR4 RAM. In the graphics section, Geekbench identifies it as having "Xe Graphics" with 512 EUs (labeled as "Compute Units in Geekbench) and a 1.8GHz clock speed. Going on the assumption that this is a legitimate entry, it tells us a few things.
For one, it indicates that Alchemist is on track, a notion Intel suggested during its Architecture Day 2021 event when the company said its first discrete GPUs will arrive in early 2022 (we're most likely looking at a CES unveil). The benchmark also tells us that Intel will be pairing Alchemist with Tiger Lake-H, rather than holding out for its eventual Alder Lake-H laptops. 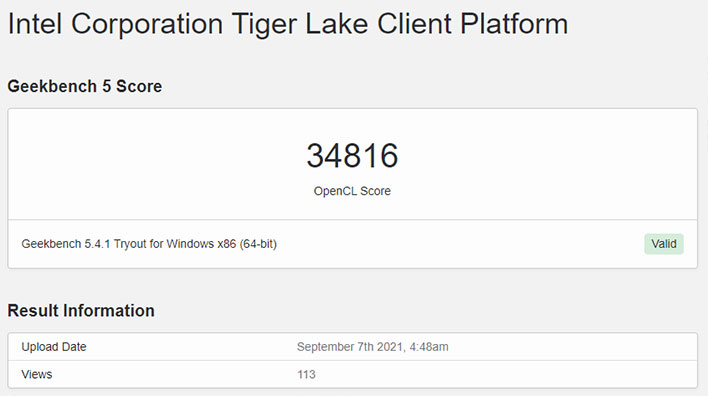 Then there is the actual benchmark result—it posted an OpenCL score of 34,816. Quite frankly, that's not a great score. It is significantly higher than previous leaks depicting the 265 EU model, but compared to AMD and NVIDIA, there is a sizable gap in performance with their respective top silicon.
Geekbench makes it convenient to offer up rough comparisons by maintaining a list of average scores for various GPUs. Here are some of them in the OpenCL benchmark...
As always, we'd caution against reading too much into this, because it's an early leak. In desktop form, past rumors have stated Alchemist will be roughly on par with a GeForce RTX 3070 Ti. Mobile variants are not likely to perform quite as well, but if that is true, we would expect a less steep drop-off in performance.
We'll find out in due time, just not this year.