We know a little bit about Intel's CPU roadmap, and not just from the rash of leaks and rumors. Intel has let it be known that it is planning to launch its 11th Gen Core "Rocket Lake-S" desktop processors in the first quarter of next year. It will be the last major CPU launch on Intel's 14-nanometer node. Sometime after that, Intel will introduce a hybrid CPU architecture codenamed Alder Lake, built on a 10nm node. As it pertains to the latter, an apparent engineering sample has found its way to Geekbench.
While not exactly the same concept, the go-to comparison for Alder Lake is Arm's big.LITTLE design. They are very different architectures. But without taking a deep dive into the comparison, Alder Lake will combine high-performance cores based on Intel's Golden Cove architecture, with power efficient cores based on Gracemont, as outlined at Intel's Architecture Day 2020 event.

In essence, Golden Cove would serve as the 'big' cores and Gracemont would serve as the 'small' cores. This could lead to some interesting configurations, whereby the number of threads will not necessarily be double the number of the total cores, depending on the SKU and arrangement. We will have to wait and see what materializes.
While we sit and wait, an apparent Alder Lake-S desktop CPU has found its way to Geekbench. Have a look... 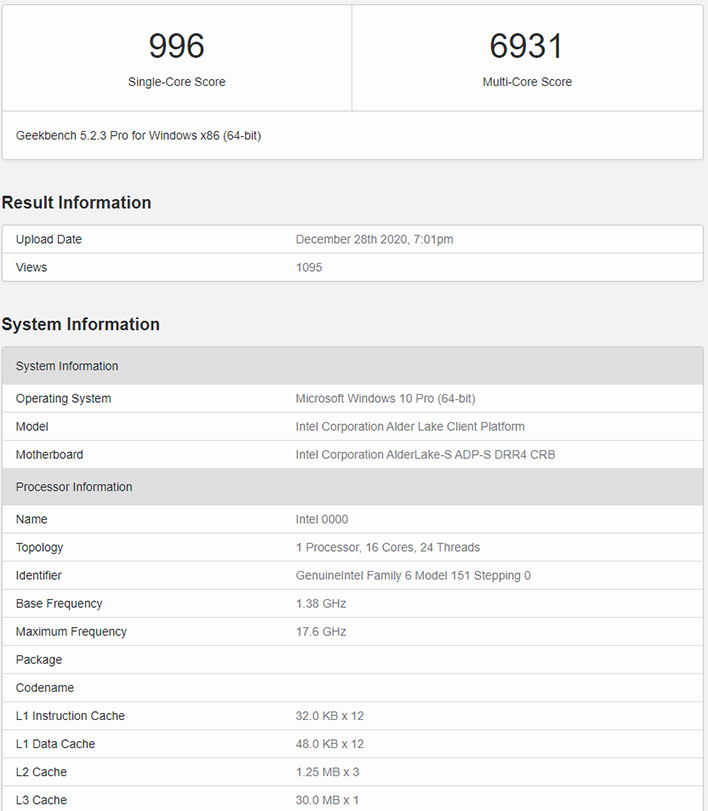 According to the listing, this unnamed Alder Lake-S processor (it's identified simply as "Intel 0000") sports 16 cores and 24 threads. That may or may not be accurate, but it does reinforce the notion that threads will not necessarily be double the number of total cores. Assuming it is accurate, however, we are looking at 8 Golden Cove cores with 16 threads, paired with 8 Gracemont cores with 8 threads.
The listing also identifies the Alder Lake-S chip as having a 1.38GHz clock and a...17.6GHz max turbo clockspeed! Better break out the vat of liquid nitrogen, because unless Intel struck a deal with the devil, there is no way Alder Lake-S is hitting 17.6GHz on air or even liquid cooling.
Of course, that is a mis-reading by Geekbench, given that this is a very early ES chip. But hey, we can dream, right? In any event, the listing also shows 30MB of L3 cache.
As to the performance of this early sample, it scored 996 in the single-core test, and 6,931 in the multi-core test. Those are ho-hum scores. For reference, in the Core i7-11700K versus Ryzen 7 5800X showdown we wrote about yesterday, both posted Geekbench scores that are around 100 percent higher in both single-core and multi-core categories.
That is not unexpected, though, given the early stage and presumably low clocks (based on the base clock reading). Finalized Alder Lake-S hardware should definitely perform quite a bit better than this showing, as well as bring some nifty new technologies to the table, like PCI Express 5.0 and DDR5 RAM support.