The age-old battle between AMD and Intel became interesting again when the former launched its Zen architecture in 2017, followed by Zen+ in 2018 and especially Zen 3 earlier this year. For the most part, Zen 3 put AMD ahead of its rival, in terms of overall performance, but will Intel retake the lead when Rocket Lake-S arrives next year? Geekbench may provide a clue.
Rocket Lake-S is the codename for Intel's 11th Gen Core desktop processors featuring Cypress Cove cores, due out early next year. Unless things change, it will be Intel's last major consumer architecture built on a 14-nanometer node. Hoping to go out with a bang, Intel claims Rocket Lake-S will deliver a double-digit percent IPC (instructions per clock) improvement over Comet Lake-S (10th Gen Core desktop CPUs).
Intel's next-generation architecture will deliver support for PCI Express 4.0 on the desktop (up to 20 CPU lanes). It will also feature new overclocking capabilities, integrated USB 3.2 2x2 support, Xe graphics, and a few other tidbits, some of which will come by way of a new 500 series chipset.
AMD, meanwhile, is cranking out another generation of 7nm processors, those being the Ryzen 5000 lineup, which delivers a nifty IPC gain over the previous generation Ryzen 4000 series (see our Ryzen 9 5950X and 5900X review). This sets the stage for a showdown between Zen 3 and Rocket Lake-S, and as a preliminary bout, there is an interesting benchmark comparison over at Geekbench. It pits an Intel Core i7-11700K against a Ryzen 7 5800X.
The Core i7-11700K has not been released yet, but according to the benchmark listing (as well as previous leaks), it is an 8-core/16-thread CPU with a 3.6GHz base clock and 16MB of L3 cache. There is no mention of the turbo clock, but we know this is a Rocket Lake-S part.
As for the Ryzen 7 5800X, it has already been released and is also an 8-core/16-thread processor, but with a 3.8GHz base clock, 4.7GHz max boost clock, and 32MB of L3 cache.
Here's how the two compare in the benchmark showdown... 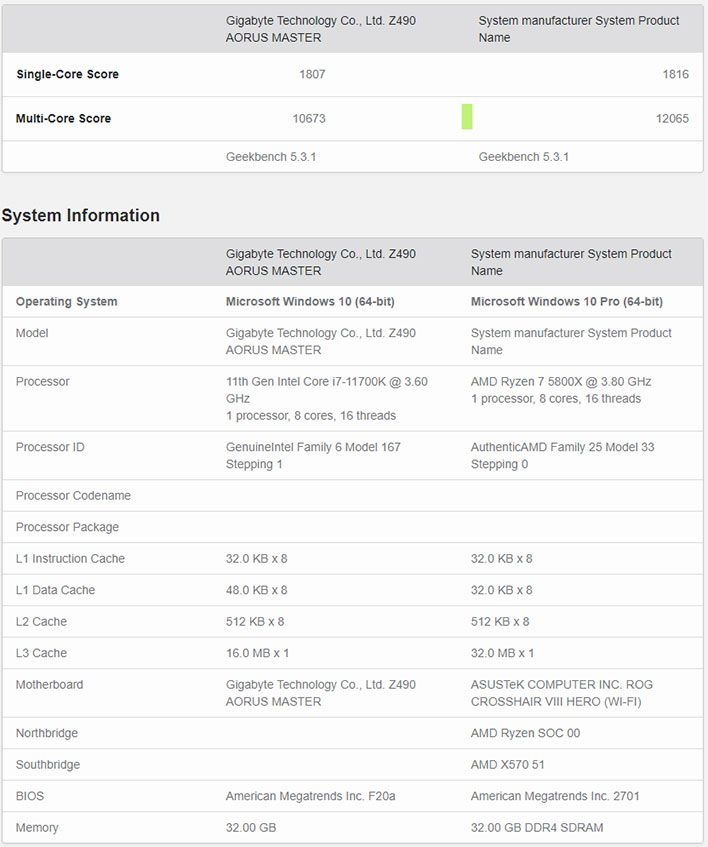 The Core i7-11700K was installed in a Gigabyte Aorus Master Z490 motherboard with 32GB of RAM, while the Ryzen 7 5800X sat in an ASUS ROG Crosshair VII Hero motherboard, also with 32GB of RAM installed in the test system.
Single-core performance was close between the two—the Core i7-11700K scored 1,807, while the Ryzen 7 5800X scored a tad higher at 1,816. It should be noted that the Zen 3 chip has a 200MHz base clock advantage. What we don't know, however, is how the burst/boost/turbo clocks compare, so we can't really make an accurate IPC comparison (which is different than a single-threaded performance comparison). Other reasons get in the way as well, one of which is that this showdown compares an engineering sample against finalized hardware.
Nevertheless, it appears from this single benchmark run that Rocket Lake-S will be competitive with Zen 3 in single-threaded workloads. It might even jump ahead a bit, depending on what difference finalized silicon and the 500 series chipset make, but we'll have to wait and see—it could just as easily end up behind.

As for multi-threaded performance, the Core i7-11700K scored 10,673, while the Ryzen 7 5800X scored 12,065. Or in other words, the Zen 3 scored around 13 percent higher. That is not insignificant, though the same caveats apply.
The other thing worth pointing out there is that AMD is not standing pat. Rocket Lake-S may or may not take back the performance crown from AMD. But either way, AMD will continue to apply pressure, with the pending launch of Zen 4 sometime next year.
This all bodes well for consumes, presuming stock shortages don't continue to get in the way of the fun.