While it's still early, there is more evidence than not to suggest that Intel's upcoming Alder Lake processors will adopt a design scheme similar to ARM's big.LITTLE approach. This essentially entails a mix of higher powered cores for big tasks, and more power efficient cores for lighter weight chores, all wrapped in the same slice of silicon.
Officially, this all still falls under the rumor category. However, it sure looks like Intel is going in the big/little direction. This was spotted recently posted a leaked document suggesting Alder Lake on the desktop will arrive with up to 16 cores arranged in a big-slash-little format.
Fast forward to now and Twitter user HXL has spotted an interesting screenshot on a Chinese-language forum. The screenshot shows an Intel document highlighting its Hybrid Technology. 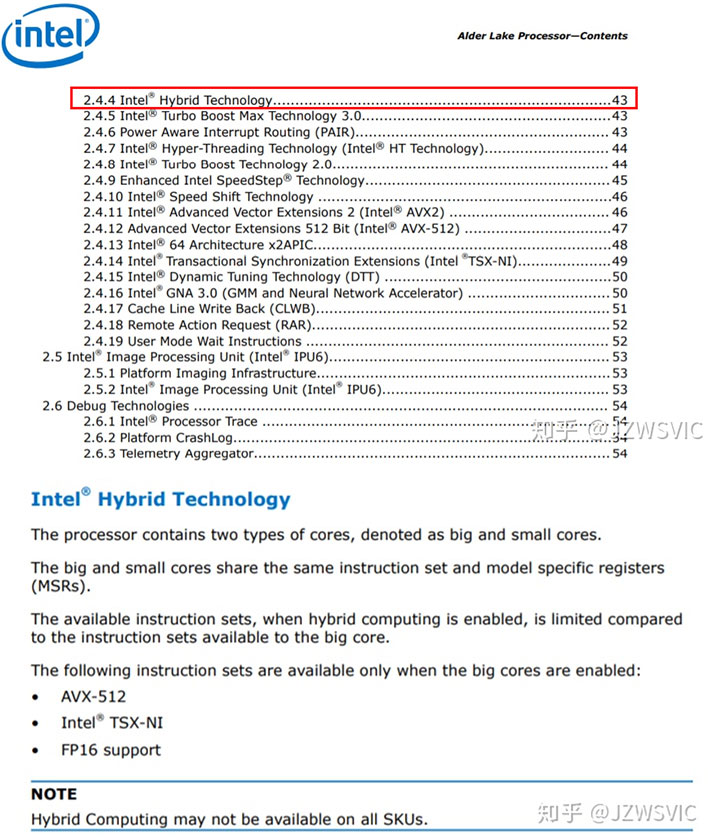 "The processor contains two types of cores, denoted as big and small cores. The big and small cores share the same instruction set and model specific registers (MSRs). The available instruction sets, when hybrid computing is enabled, is limited compared to the instruction sets available to the big core," the Intel slide states.
The slide also notes that "Hybrid Computing may not be available on all SKUs." That little disclaimer is consistent with past rumors surrounding Alder Lake. Specifically, a previous slide showed three upcoming Alder Lake-S processors configured as such...
The 8+8+1 configuration denotes eight big cores, eight small cores, and integrated GT1 graphics. Likewise, the 6+0+1 configuration works out to be six big cores without any small cores, also with integrated GT1 graphics.

One thing that remains unclear is why Intel would go this route on its desktop processors. The big-slash-little approach makes sense for mobile devices, including smartphones and laptops, where battery life comes into play. But in desktops, it seems less important. We'll just have to wait and see what Intel's marketing pitch is, when Alder Lake-S arrives.