What the F is going on over at Intel? Well, if this latest leak is any indication, the chip company is ready to unleash a new series of F SKUs for its upcoming Alder Lake-S desktop processors. For those that aren’t familiar with the intricacies of Intel’s processor nomenclature, the F designation at the end of the model number signifies that the integrated GPU is disabled.

In the case of the Alder Lake processors, reliable leaker Komachi Ensaka claims that the following F SKUs will join the standard processor lineup:

These processors will have the same core/thread and base/turbo clocks as their non-F counterparts. However, by giving up the integrated Xe GPU, gamers can expect to save a couple of bucks off the purchase price of a Core i9-12900K, for example. And when you think about it, the chances of a gamer that would otherwise purchase a Core i9-12900K using the integrated graphics is likely slim to none. Instead, they would most likely pair the processor with a high-end discrete graphics card like the NVIDIA GeForce RTX 3080 Ti or the AMD Radeon RX 6800 XT. In fact, Intel would probably entice gamers to slap in an Arc (Alchemist) discrete graphics card come Q1 2022. 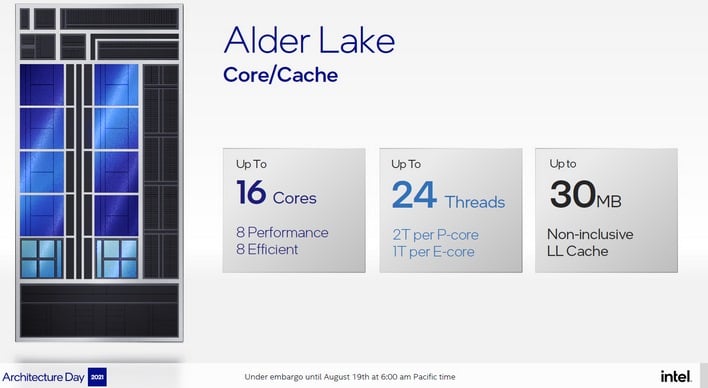 Alder Lake is shaping up to be a monster release from Intel and is defined by its hybrid architecture that combines Golden Cove high-performance cores with Gracemont efficiency cores. Only the Golden Cove cores are Hyper-Threading enabled, which is why a 16-core processor like the Core i9-12900K can “only” execute 24 threads.

Speaking of the Core i9-12900K, recent benchmarks show it easily outpacing AMD’s beastly Ryzen 9 5950X 16-core/32-thread Zen 3 processor in single- and multi-threaded tests. Of course, this is just one result from the synthetic Geekbench benchmark, but it is still a promising early start for Intel’s 12th generation Core processors.