Not every performance leak related to Alder Lake has been super encouraging, but this latest one certainly falls into that category. It showcases the upcoming Core i9-12900K in Geekbench, and both the single-threaded and multi-threaded scores are nothing short of impressive. They also seemingly highlight why the OS matters (more on that in a moment).
We've seen the Core i9-12900K in numerous leaks up to this point. In line with those leaks, Geekbench recognizes it as being a 16-core/24-thread processor. As we have discussed before, the ratio of cores to threads will, for the most part, be different than what we are used to, because Alder Lake combines high performance Golden Cove cores with more power efficient Gracement cores on the same chip.
As it applies to the Core i9-12900K, we're looking at eight Golden Cove cores with Hyper Threading support and eight Gracemont cores without Hyper Threading capabilities. So the math is as such: 8 big cores + 8 threads + 8 small cores + 0 threads = 16 cores and 24 threads. 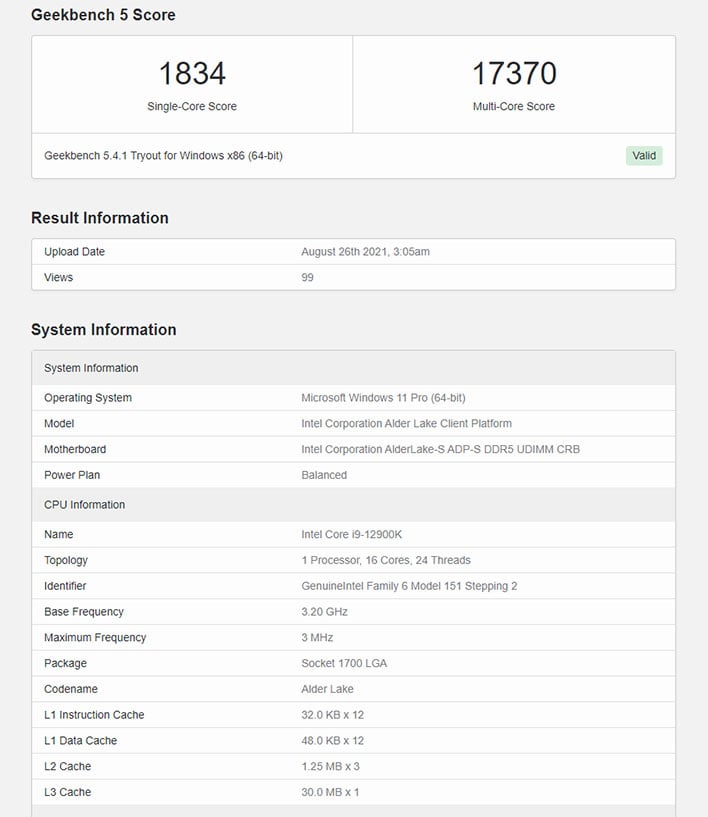 There are actually a few Geekbench listings that were spotted by various leakers on Twitter. The best of the bunch is shown above, with the Core i9-12900K scoring 1,834 in the single-threaded test and 17,370 in the multi-threaded test. Those are strong results. How strong, exactly? They are better than what AMD's flagship Ryzen 9 5950X scores on average. 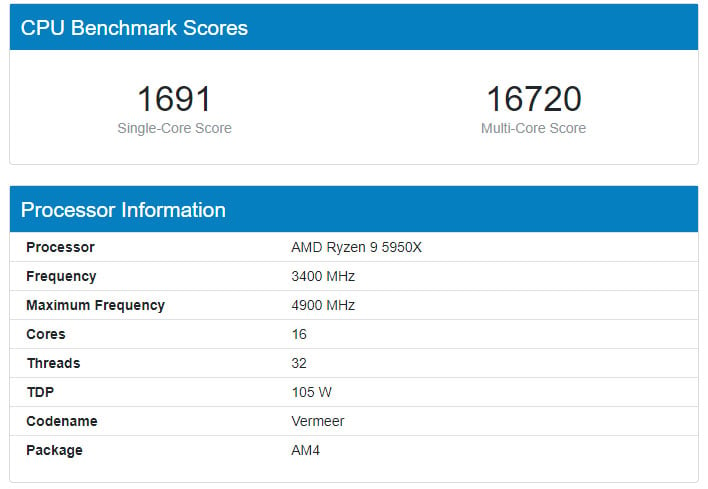 Geekbench handily maintains a list of average scores, which peg the Ryzen 9 5950X as typically hitting 1,691 in the single-threaded test and 16,720 in the multi-threaded test (as shown above). Compared to those scores, the Core i9-12900K fared around 8.5 percent better in the single-threaded benchmark and about 3.9 percent better in the multi-threaded run, compared to AMD's finest silicon. Not bad for a product that hasn't been released yet.

This is a bit of a better showing than we have seen from the Core i9-12900K, and it's not a coincidence that the platform used was running a pre-release version of Windows 11. As we have observed first hand (with Lakefield), Microsoft's upcoming OS squeezes more out of hybrid architectures than Windows 10. And with Alder Lake in particular, Intel is introducing a Thread Director feature that aims to boost performance, as was discussed during the recent Intel Architecture Day 2021 event.
It's also reasonable to anticipate that these performance figures will improve when Alder Lake ships. A combination of finalized chipset drivers and polished Windows 11 code should only help. But of course this is an unofficial benchmark run, so as always, we caution against reading too much into the numbers. That said, it appears Alder Lake is on the right track.