Intel's upcoming Core i9-12900K processor is the star of yet another leaked benchmark run, and like several that have come before this one, it adds to the pre-launch hype and expectations surrounding Alder Lake. Obviously we can't put too much stock into pre-release (read: unofficial) benchmarks. But they are out there all the same, and they are collectively setting an interesting bar for Intel to achieve.
The Core i9-12900K figures to be Intel's flagship Alder Lake CPU on the desktop, at least initially. During the Intel Architecture Day 2021 event last month, Intel reiterated that Alder Lake will be offered with up to 16 total cores, including up to eight high performance Golden Cove cores and up to eight power efficient Gracemont cores.
A full configuration, then, would feature 16 cores (8 big + 8 small) and 24 threads, since big cores support Hyper Threading (8 big + 8 threads + 8 small = 24). The L3 cache will max out at 30MB. And so that is what we are looking at for the Core i9-12900K. What we don't know for sure yet are the clock speeds, though past leaks have given us an idea.
What about actual performance, though? Have a looked at this leaked CPU-Z benchmark run... 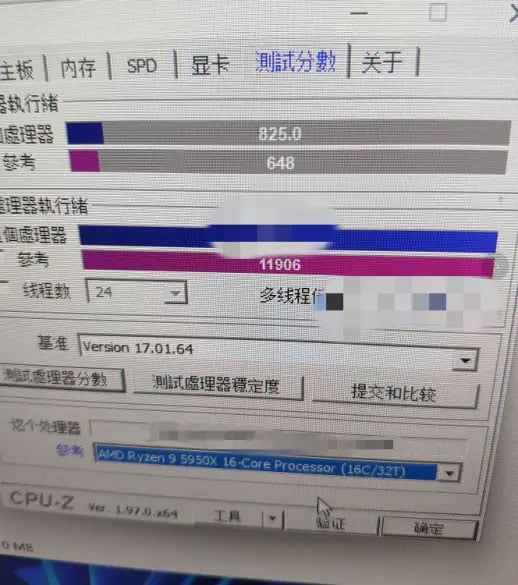 A forum member at Bilibili posted the above photo of a screenshot, using what we can only assume is a Fisher Price camera with Vasoline smeared over the lens. Taking clean photos of displays that are constantly refreshing is challenging enough as it is, but as is frustratingly common when it comes to leaks, this off-angled and semi-blurry shot looks like an intentionally bad shot.
Mini rant aside, the real story here is the single-threaded score. The Core i9-12900K scored 825 points in CPU-Z's single-threaded test, which is impressive. As to how impressive, we just so happen to have on hand a desktop similar to the Falcon Northwest Talon we reviewed, with the same Core i9-11900K Rocket Lake chip inside. We ran it through CPU-Z as a point of comparison... 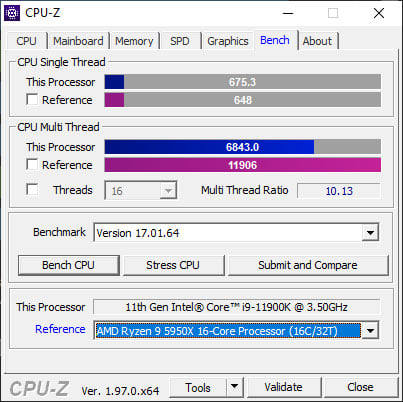 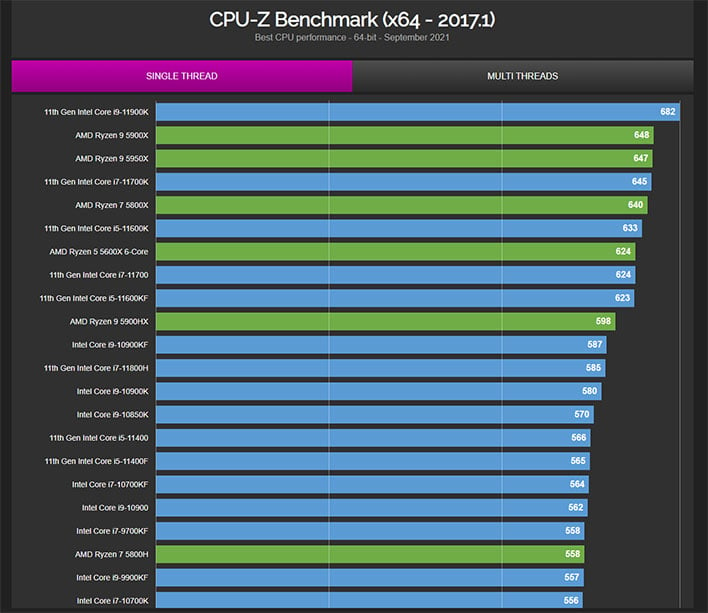 Looking at CPU-Z's database (which has a slightly higher Core i9-11900K single-threaded score than what we achieved), the leaked Core i9-12900K benchmark would put it in pole position. Good stuff, potentially.
Unfortunately, whoever took the photo decided to conceal the multi-threaded score. The bar is maxed out, but that doesn't mean it scored the same as the Ryzen 9 5950X. It may have, but it might have also scored better. We just don't know.
We also don't know the particulars of this setup. Namely, was the CPU sample overclocked or running at stock speeds? And what kind of cooling was used? Both of those can affect benchmark scores.
Regardless of the all the unknowns, this is yet another encouraging benchmark that adds to the pre-release hype. We'll find out soon enough if Alder Lake can deliver on what we are seeing in leaked benchmarks—rumor has it Alder Lake will be announced in October and released to retail in November.