Intel hasn’t officially announced its 12th generation Alder Lake processor families yet, but that isn’t stopping Lenovo from giving us a teaser of what’s to come. The company today pulled the wraps off its Legion 9000K (2022) desktop PC via Weibo.


Translating the text on the poster, Lenovo says that the system is “Equipped with a new Core 12th generation processor.” This confirms that we’re looking at a system powered by Alder Lake, and that’s further backed up by the mention of DDR5 memory and PCIe 5.0 support. 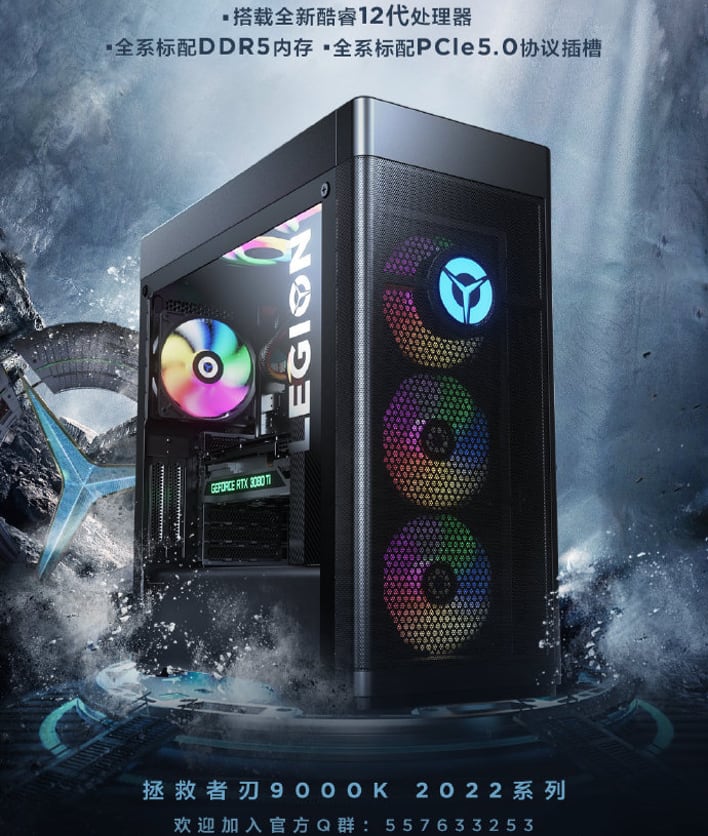 Although there is no mention of what processors are in use with the system, one of the following SKUs will likely be included:

We’d also imagine that Lenovo is using an Intel Z690-based motherboard, which would bring the necessary support for the aforementioned PCIe 5.0 and DDR5 interfaces. We also take note of a GeForce RTX 3080 Ti graphics card in the system, which shows Lenovo is going after hardcore gamers with the Legion 9000K.

According to ITHome’s sources, Lenovo will announce the Legion 9000K on October 29th, which is a month away from today. We should mention that Intel is holding an event on October 27th, where it is widely expected to formally announce its Alder Lake processor lineup. Another date to keep in mind is November 4th, which was put forth by MSI. Systems using Alder Lake may be available on that date, running Windows 11, of course.

Recent Alder Lake benchmarks, notably featuring the Core i9-12900K, show that Intel will have a solid challenger to AMD's Zen 3 family including the Ryzen 9 5950X on the performance front.