We have seen photos of Alder Lake and its accompanying LGA 1700 socket before this point, but never one that wasn't part of a leak. That changes today. In anticipation of Alder Lake's imminent arrival, Intel vice president Gregory Bryant shared a picture of a pair of Alder Lake CPUs, held up by an engineer in one of the company's chip facilities.
The unnamed engineer is clearly not in an area where a full body suit is required, to prevent dust, hair follicles, and dead skin cells from contaminating the environment. What we get instead is a makeshift chip fab runway to model the front and back of two Alder Lake processors that have not yet been labeled. Perhaps this is the flagship Core i9-12900K.
There aren't any concrete details accompanying the post, just some additional confirmation that Alder Lake will be in short order. There's also plenty of excitement to go around.
"Coming soon to PCs globally: 12th Gen Intel Core processors. We can't wait to show you the experiences they unlock!," Bryant wrote. 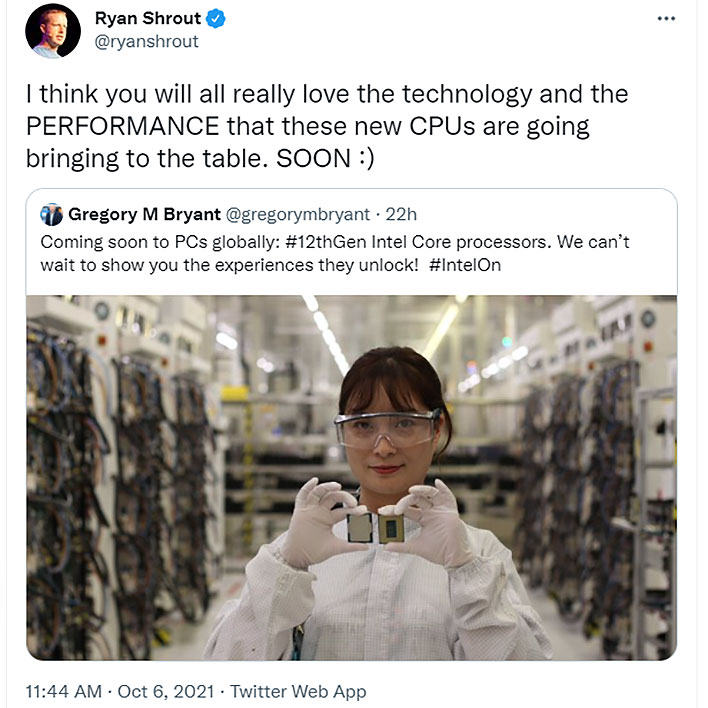 This was echoed by Ryan Shrout, Intel's chief performance strategist, who shared the Twitter post and on his own feed and teased big performance gains on the horizon.
"I think you will all really love the technology and the PERFORMANCE that these new CPUs are going bringing (sic) to the table. SOON :)," Shrout stated.
This is obviously to drum up excitement for a new product launch, and hey, we're always happy to see photos like this. Whether the enthusiasm is truly warranty, every indication so far is that it is. There have been a boatload of benchmark leaks related to Alder Lake, and many of them suggest it is in great shape. Obviously we won't truly know until the chips arrive, but the leaks have been promising, for whatever that is worth.
It is also noteworthy that Windows 11 has officially launched. Windows 11 is specifically tuned to take better advantage of hybrid architectures like the one Intel is deploying with Alder Lake. We saw this with some early testing of our own. We benched low-powered Lakefield machine and saw better performance when running it on a preview build of Windows 11 versus Windows 10. So color us cautiously optimistic that Alder Lake will deliver on the hype.
Answers are not far off. It's rumored Intel will unveil its first Alder Lake SKUs this month, and then release them to retail in November. The timing sounds about right, given the solo photo shoot from within Intel's own house, as well as the retail listings that vendors like Amazon and others have been preparing.