Intel has published another episode of the Tom and Ryan Show. This time, the hot topic is Ray Tracing on Intel’s slowly emerging line of Arc Alchemist discrete GPUs. While it is interesting to hear about real-time ray tracing on Intel hardware, and the underlying technology, we are most interested in Intel’s claims—backed up with charts—that the upcoming Arc A770 clearly outshines the GeForce RTX 3060 in ray traced gaming performance.

The key 1080p performance chart shared by Intel shows the Arc A770 beating the RTX 3060 by as much as 56% (Fortnite). It features 17 popular modern games with real time ray tracing turned on. Other significant big name gaming wins were in titles such as Watch_Dogs: Legion, Control, Hitman 3, Metro Exodus, Dying Light 2, Resident Evil Village, and F1 2021. Out of 17 titles tested, the Nvidia contender only beat the A770 in four, and only by significant margins in Guardians of the Galaxy and Battlefield V. 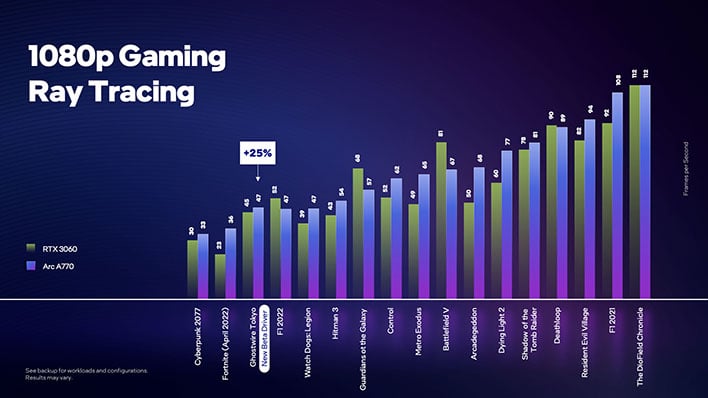 Intel did not appear to want to put forward inter-brand comparisons for 1440p game testing with the A770. Instead, it showed the performance of the A770 in five titles with ray tracing plus different levels of XeSS applied. In games like Ghostwire Tokyo and Hitman 3, we saw frame rates almost double using the accelerated super sampling technology. Other games didn’t show such a dramatic improvement, but would surely benefit from the silkier frame rates, approaching 90fps or more. 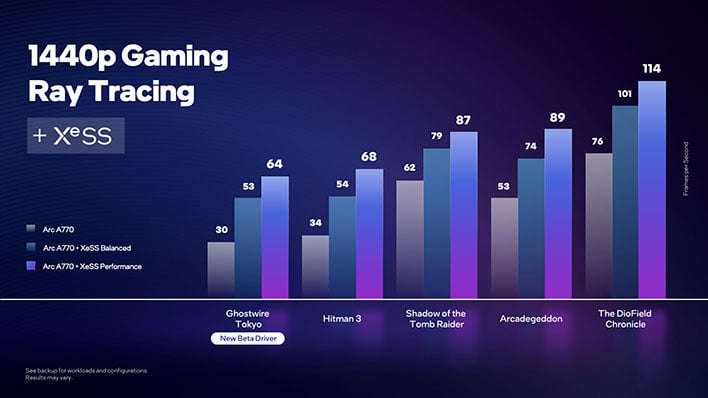 HotHardware.com readers will be well versed in how ray tracing works on PCs, but the video shared some interesting technical insight into Intel’s implementation. Arc GPUs have specialized Ray Tracing Units (RTUs) with two Ray Traversal Pipelines capable of handling 12 box intersections and a triangle intersection per cycle. Moreover, it is claimed to provide Asynchronous Ray Tracing thanks to Intel’s Thread Sorting Unit. The TSU helps ensure maximum utilization of the Xe cores. AMD and Nvidia don’t publish comparable data, so we can’t make a table showing the differences using the aforementioned metrics. 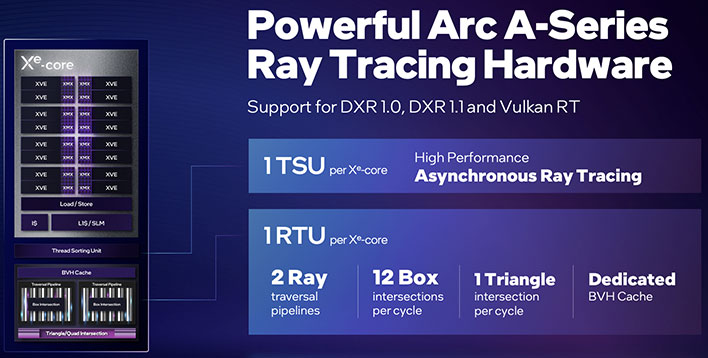 One other thing to consider with Intel Arc’s ray tracing performance is that the A770 is Intel’s top current gen discrete GPU with 32 Ray Tracing Units (RTUs). The only Intel Arc GPU widely available today is the A380 with just eight RTUs.

Intel’s highly anticipated Arc A770, and other models like the Arc A750 and Arc A580 should be launched before the year is out and bring fresh blood to the value GPU market. Bearing in mind Intel sought to compare the Arc A770 with the RTX 3060 above, we hope its MSRP pricing will be at a similar level or less ($329 USD).