Earlier this month at CES 2021, Intel officially confirmed that its 12th generation Alder Lake CPU architecture will launch during the latter half of 2021. Intel says that Alder Lake will be the "most power-scalable system-on-chip” ever produced, and will be manufactured using the company's advanced 10nm SuperFin technology.

Even though Alder Lake-S desktop processors are likely months away from release, an early engineering sample has found its way to the SiSoftware database, and it's quite an interesting chip. As you might expect for a processor that is launching in the latter half of 2021, it will support the emerging DDR5 memory standard, which companies like Adata and TeamGroup have thrown full support behind. 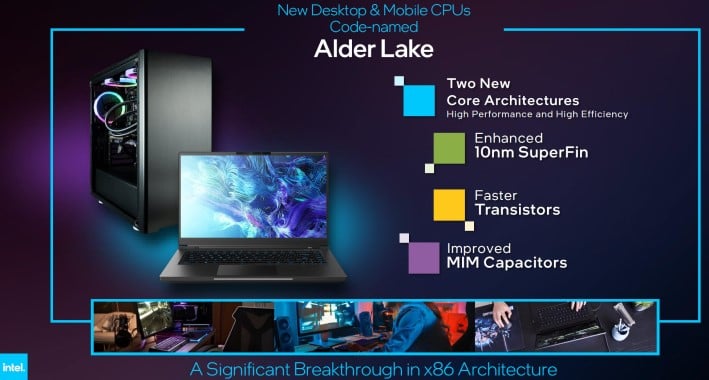 This particular chip has 16 cores and 32 threads, which is a more typical core/thread configuration than what we've previously seen with Alder Lake-S engineering samples (i.e., we came across an engineering sample with 16 cores and 24 threads back in late December). The processor is reporting a base clock of 1.8GHz and a turbo clock of 4GHz with 12.50MB of L2 cache (10x 1.25MB). Also onboard is 30MB of L3 cache according to the SiSoftware database.

Not surprisingly, there's an Iris Xe-based graphics controller onboard with a 1.5GHz clock speed and a reported 32 EUs along with 256 stream processors. The chip is shown running 32GB of DDR5-4800 memory, which is to be expected at this early stage in the game for the next-generation memory technology. Finally, the listing shows that there's an Intel AX210 Wi-Fi 6E module onboard this system, showing that next-gen systems will hit the ground running with the new Wi-Fi standard.

In addition to an all-new big.LITTLE-esque hybrid CPU architecture (which we first saw with Intel's Lakefield processors), this will mark the first time that Intel is able to break free of its reliance on the old and tired 14nm process node for its desktop processors. Intel made the shift to 10nm on the mobile side a while ago, but shifting to 10nm (and eventually 7nm) is critical to Intel pursuing further gains in performance while keeping power consumption in check. As an aside, it's rumored that Intel had to cap its incoming Rocket Lake-S processors at 8 cores (instead of 10 cores as in the previous generation Comet Lake-S) in order to reel in thermals.

With that said, we're still far out from the launch of Intel's Alder Lake-based processors, so there's still more to be revealed directly from Intel, and from channel leaks. So, stay tuned as we cover Alder Lake from every angle in the coming months.